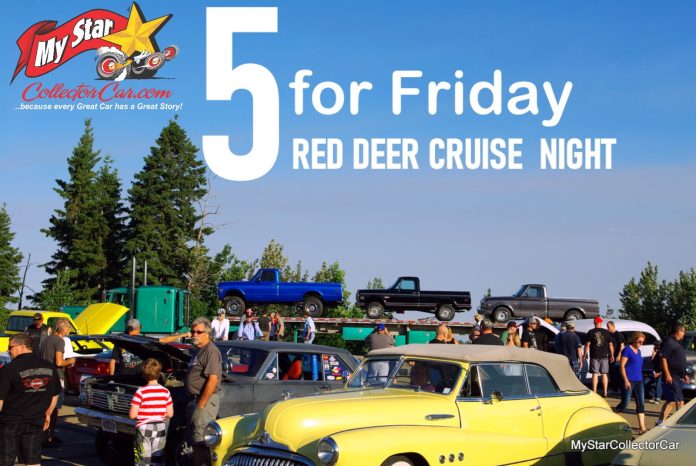 Cruise Night in Red Deer, Alberta, Canada is the longest running weekly car show in the province and they kicked off their show last night.

In fact–too many highlights–so these five from past shows are only the tip of the iceberg from a massive collection of memories.

The first highlight came early. The MyStar files go back to 2007 when the show was in downtown Red Deer in a small parking lot. There was a ’67 Coronet at the show, but it would be years before it became a MyStar story in 2012.

The Coronet was put on the future stories list in 2007, but MyStar didn’t go live until 2009. The car is still in great shape and still has the same owner.

The second highlight came when the show moved across the street later in the summer of 2007. They had outgrown the smaller parking lot, so they migrated to a bigger one to accommodate more cars.

MyStar found a ’48 Plymouth convertible with a fuel-injected 392 hemi back in 2009 at the new location. It was built by a local legend who had no trouble solving the mystery of the fuelie system.

A retro-fit fuel injection system is routine in 2022, but back in ’09 it was cutting-edge technology, so MyStar ran the story.

The third highlight came when the show moved to the Parkland Mall in 2010. The show outgrew the downtown parking lot scene, but oddly enough, also they outgrew the front of the mall.

That’s where this 1966 Travco motor home was found in 2011. Red Deer Cruise Night is well-known for the sheer variety of the entries and this big RV is a good example. The paint job was worth the MyStar story on its own.

The fourth highlight came from Red Deer Cruise Night’s fourth location. They started the year at the mall, but they moved to a new location at a church parking lot just outside of town in June 2015.

Construction at the mall played a factor in the move, but the new location provided many MyStar owner’s stories because it was packed on many nights.

One of the stories was about a pro touring ’68 Mustang. This pony was outstanding on a night back in August 2016 when the rain came and then the sun came out to expose this classic ‘stang.

The fifth highlight from Cruise Night came when the show moved back to the mall. They started the season in May at the church, but they went back to the mall in July that year.

One of the many highlights from that season was a 1967 GMC bus. Again, it spoke volumes about the variety at Cruise Night and it was a solid pick for the fifth highlight story.

MYSTAR OCTOBER 14 FIVE FOR FRIDAY: FIVE WELL-NAMED CARS FROM THE PAST