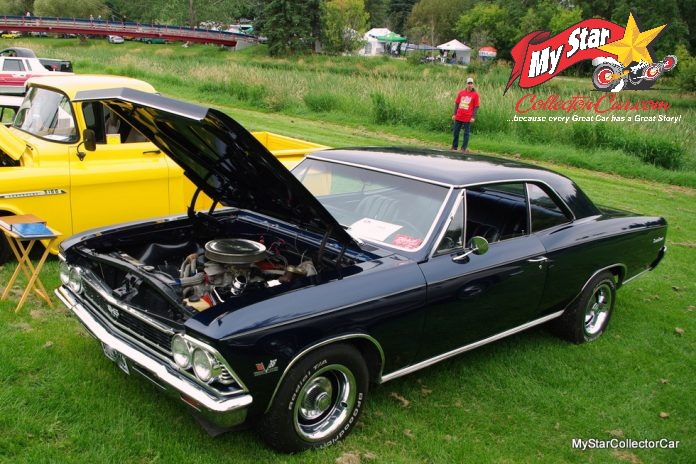 A long-term plan is the foundation of a car project because most of them are measured in years—not weeks.

The key to success is patience because once the job is done the owner reaps the reward of a job well done.

This 1966 Chevelle SS396 tribute is a good example of a job well done.

Brad Zibrowski bought this car back in 1986 when it was still a humble Chevelle with a modest 283 small block under the hood.  The 283 may have been fine for the original owner but Brad had a different game plan for the Chevy.

He had a spare 396 big block rescued from a wrecked Chevy pickup that didn’t survive the power of the built engine under the hood. It was 10:1 compression, cammed-up and it had a high-rise manifold and it was perfect for the ’66 Chevelle so Brad said it “found a new home”.

Brad also looked at “everything underneath” so his Chevelle had new brakes and suspension installed because this car was destined to haul his kids and he wanted everything done right. The car was basically sound but the fenders were new, the quarters, rockers and floors were good but there was a little rust in the trunk. Brad did everything himself and the former autobody tech admitted, “it was the last whole car I painted”.

Brad also did some cosmetic upgrades to the Chevelle. This was originally a red car with a red interior but he had other ideas so he bought a new black interior and did the interior himself too. He also changed the color and added the SS396 badges.

Since then, Brad simply enjoyed time behind the wheel of his Chevelle and his kids grew up in the back seat of the car. He was pulled over once by the police “because they wanted to look at the car” but the last thirty years have been mild for the car because it gets weekly workouts and the occasional grocery run.

He did one more upgrade on the car because it runs a 3:73 rear gear so it was working pretty hard on the highway with a Turbo 400 transmission. Brad said it was “running 3200 rpms at 60 miles per hour”  so he upgraded to a 700R4 transmission—it dropped down to 2200-2300 rpms at the same highway speed so road trips are less of an ordeal now in the Chevelle and he can run it at higher speeds.

Brad admits there are a few things left on the table with his Chevelle because the heat gauge “runs close to 210-212” so he has an electric fan ready to go but it’s still on the ‘things to do’ list.

Brad’s older son has a long history with the car so he likes to drive it any time he can and Brad does occasionally toss him the keys even though the car “really gets up there—especially in first gear. Brad’s wife—on the other hand—isn’t a fan of driving the Chevelle over the past 30 years for a simple reason.

“It gets too much attention”.