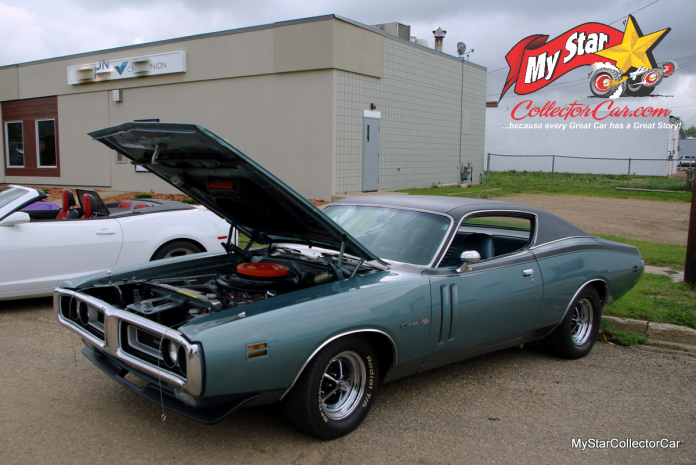 Numbers-matching is the siren song of the car hobby because, (in most cases) a car with a factory engine is worth significantly more than one with an aftermarket mill under the hood.

The resto-mod movement has altered the equation because car guys love new innovations that make their car run better – or faster.

This ’71 Charger RT is a great example.

Kevin James owned a ’73 Charger in his younger days, so he bought the car about eight years ago from a well-known Mopar collector because he was known for his quality and attention to detail. Kevin said he “saw what I wanted” in the Charger so he cut a deal.  Kevin believes the car was originally “bought by a woman in Florida who couldn’t see over the hood so that’s why they gave her a flat hood”. The current hood is all about truth in advertising because the 426 hemi call-outs are in plain sight.

In this case, the last owner went off the ‘keep it original’ game plan, so he yanked the 440 out and replaced it with a crate 426 hemi. Kevin bought the Charger as-is and took the 440 as part of the package – it now resides under the hood of a Challenger. This Charger was the ultimate Mopar recycling plan.

Kevin liked the concept of an elephant (426 hemi) under the hood, but he wanted something he could drive on a regular basis. The 426 hemi is a notoriously finicky engine because of its two 4-barrel carb system, so Kevin went full 21st century tech and added a state-of-the-art fuel injection system.

He sent the Charger to a local guy for the upgrades and in the process the hemi was built up to about 600 horsepower with an equivalent amount of torque – in layman’s terms this means tire-scorching performance. It also means the car has, in Kevin’s words, “a great idle”.

Kevin’s Charger runs a 4:10 rear end, so typically this means it would be running pretty hard at highway speeds. Kevin solved the problem by adding an aftermarket overdrive system so now it operates at a very acceptable rpm on the freeway.

There were other details to look at because the car ran a little hot at idle, so Kevin focused on the radiator shroud. He added a bigger shroud to handle the extra demands from the 426 hemi and now the Charger runs cool in any situation.

Kevin also owns a 60s era B-body and he said this Charger “handles a lot better than the older one” and that is a big asset because he built it to drive – not trailer. He loves the instant response from the fuel-injected 426 hemi and the overall civilized manners in the B-body.

Kevin bought this Charger based on nostalgia for his long departed 1973 Charger and he took the game up in a big way. The 426 hemi is done to 21st century standards because now it gets decent mileage thanks to fuel injection and overdrive.

That’s because the stock 440 wasn’t quite enough.