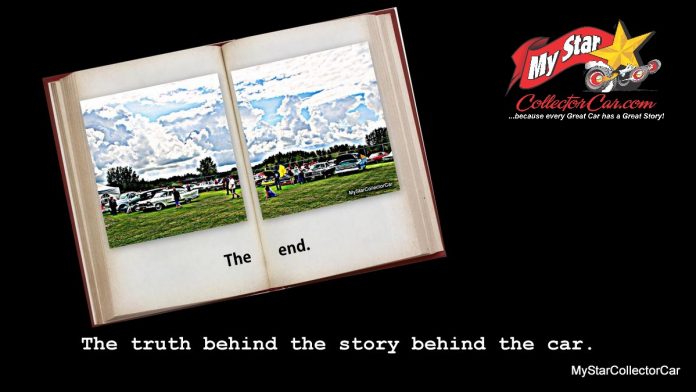 In general, car guys are happy to discuss their vintage rides with other people.

The best course of action is let the car guy or girl tells his or her story. After all, their vehicle is the rock star in the scenario and deserves center stage in a conversation, so the onlooker has an obligation to let the owner tell the story.

We at MyStarCollectorCar respect this game plan because this course of action just makes sense to us, plus it gives us valuable insight into the “how-and-why” questions behind a vehicle. We use this information when we write our owner stories so we can provide our readers with a solid article about the vehicle in question.

Our typical routine at a car show is initially a scouting mission to spot the most interesting vehicles in the herd. Then we review the information about the vehicle, both on the entry form and, even better, on sandwich boards and photo albums that accompany the vehicle.

Our follow-up is a conversation with the owner and here is where the fun starts for us. We tend to follow the crowds at shows because they gravitate toward the interesting vehicles and inadvertently become a human litmus test for us in terms of vehicle popularity.

The obvious upside for us? The large number of people around the vehicle is a solid indication it will also be a winner with our readers.

The downside is the large number of people means we will likely have to endure a wait while the vehicle’s owner faces an onslaught of opinions and questions from curious but not particularly bright onlookers.

This is the exact moment when truth and accuracy may be early casualties in the discussion about the vintage vehicle. For example, the owner is likely to hear plenty of anecdotes from onlookers about how their dad used to own a car just like the owner’s.

The truth and accuracy angle? Their dad owned a vehicle built by another car company during another decade and somehow the onlooker has mixed up the show car with their father’s barebones sedan. It may be a conversation icebreaker for the onlooker, but reality is an early victim of a faulty memory and a fill-in-the-blanks approach by the onlooker.

Consequently, the show car is nothing like the car formerly owned by the onlooker’s father, grandfather, uncle, second cousin twice removed–or even the family German Shepherd, Rex. The onlooker’s typically long-winded monologue may be a trip down memory lane for them, but there is a good chance they took the wrong road.

MyStarCollectorCar strongly advises these misfits to let the owner talk about their vehicle. It is right in front of the onlooker, so the vintage vehicle provides a solid opportunity for show-stealers to have a rare brush with automotive reality, practice their listening skills for a change, and avoid a compulsion to steal the spotlight with another pointlessly inaccurate autobiographical monologue.

Just our thoughts here at MyStarCollectorCar.