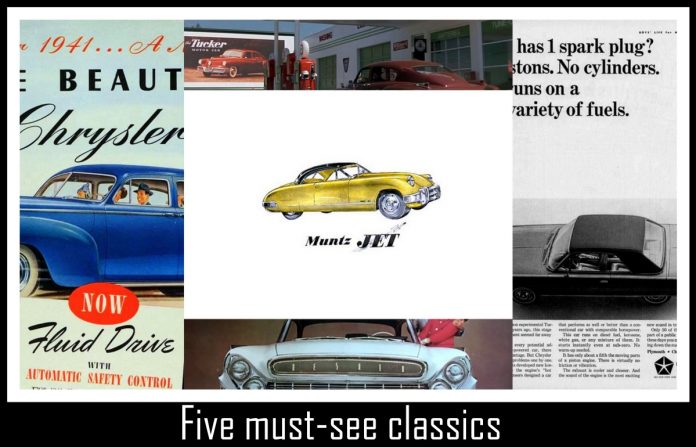 I’ve seen thousands of cars at various car shows over the years but I still have a list of classics I’d like to see in person.

The first one is a 1941 Chrysler Royal. If you’re a hardcore Mopar guy you’ll know about cars like a 1970 AAR Cuda and you’ll probably see them as rare, but a ’41 Chrysler Royal is far less likely to be a guest at your local car show.

They made just over 57,000 Chrysler Royals (Sedans and Club Coupes) in ’41 but very few survive in 2020. You won’t see a row of them at any Mopar show like you would a ’68 Charger but that’s what makes them so appealing. They’re like the Yeti of post-war cars.

The second car is the Tucker ‘48. Movie buffs know about this car thanks to the movie, but I knew about it long before Hollywood discovered it.

If you didn’t see the movie, you won’t know that the 1948 Tucker was a very low-production, high-tech car built by an independent maverick named Preston Tucker. They only made 51 Tuckers and each one is currently worth more than the GDP of Puerto Rico so I probably won’t see one at the local weekly drop-in show.

The third car is the Muntz Jet. They built 198 of them from 1949 to 1954 – they were built by Earl “Madman” Muntz and the Jets were an accountant’s nightmare.

Madman lost money on every Jet he produced but they were ultra-cool, Cadillac or Lincoln-powered sports cars. I like the cutting-edge style and technology behind the Jets, but I really like Muntz’s riverboat gambler, free enterprise attitude – that’s what makes them so appealing to me.

The fourth car is the ’61 DeSoto. You could successfully argue a case for ‘least attractive car of 1961’ status but the 1961 DeSoto represented an ending on many levels.

DeSoto had a run from 1928 to 1961 so it was much more than a flash in the pan name – it was a major piece of 20th Century automotive folklore. The DeSoto was also part of the last run for Exner fin cars. I call that a double-header for me and a big reason why I need to see a ’61 DeSoto in person.

The Ghia-designed, Chrysler Turbine Car really defined the 60s look even though they never hit the showroom floors. The car looked like it was rocket-powered and the powerplant under the hood wasn’t too far off the mark in the space age known as the 1960s.

Chrysler only built 55 Turbine Cars so I likely won’t see one at the local Mopar show but a road trip to a museum (or Leno’s garage) isn’t out of the question. It might be one-stop shopping for all five of the cars in this list.

Leno probably owns them all.