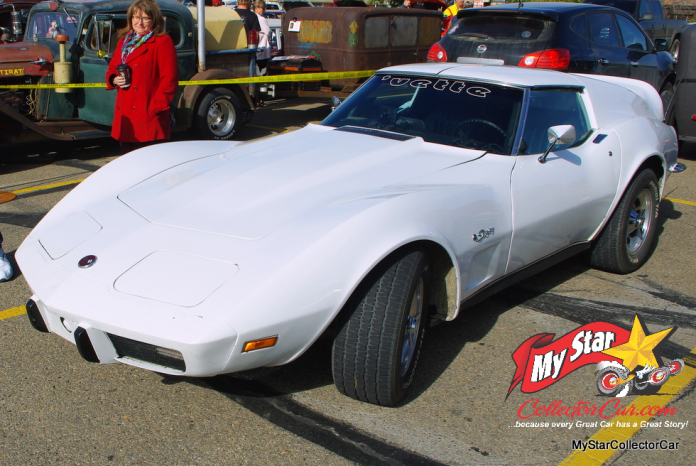 Cult cars are a minefield because the car guys who join the cult are not very flexible on any changes within the world of that particular car.

Cult cars are often European because the cars themselves represent a culture and a country so if it’s a Porsche, Austin-Healey or Ferrari you don’t want to stray far from factory specs.

Vette guys are very clear where they stand on radical custom changes to their beloved cars so in 1973 a ‘Vette Set’ custom was met with lukewarm to hostile reactions from hardcore Corvette fans. Andy de Boon knew that when he bought a tired ’73 Vette Set custom. He’d always been a huge fan of these wild customs and he knew he’d own one someday— someday came in 1988.

Andy explained how these Vettes were built in various locations right out of the factory but his was done at the Vette Set in Edmonton, AB Canada. He said, “They only built 150 of them in total and this panel version was really rare”.  In other words, Andy was the proud owner of a very unique post-factory custom.

Andy’s Vette Set custom had been dealt another card (a Joker) in the custom world because it had been hacked into a bad version of the infamous ‘Corvette Summer’ version by the time Andy found it. Not only that, Andy called it a “basket case” so he had a big job ahead of him but fortunately he had his brother Cor to help him overcome many major obstacles in the project.

He drove it for a few years before he took the car on as a real project and that’s when he knew he wanted to take this unique custom back to its first day as a Vette panel.

Andy said they “took about 40 pounds of bondo off the car” before they turned a wheel. He said the car had a “plywood front end for the custom headlights and it looked terrible” so the job was a lot harder thanks to a bad decision from the last owner a decade earlier. He had to peel several layers of paint off the Vette to get down to the original paint so this was definitely a nasty, hands-on job.  Andy gave full credit to his late brother Cor for the successful project and he admitted the job would have been a lot harder without his help.

The process took place from 1988 to 1994 during an ‘off and on’ process. Andy kept the original L-48 smog era Chevy small block even though its performance was a lot weaker with a factory 190-horse rating.

He did this because he wanted to preserve the ’73 Vette as it was in the day instead of giving it a 21st century monster heart transplant. Andy knew the historic value was a lot more important than 400 more ponies under the hood.

His Vette gets the same reaction in 2020 as it did when it was brand new on the streets of Edmonton back in 1973. People mob him at gas stations to ask about his wild-looking Vette and Corvette guys shun it.