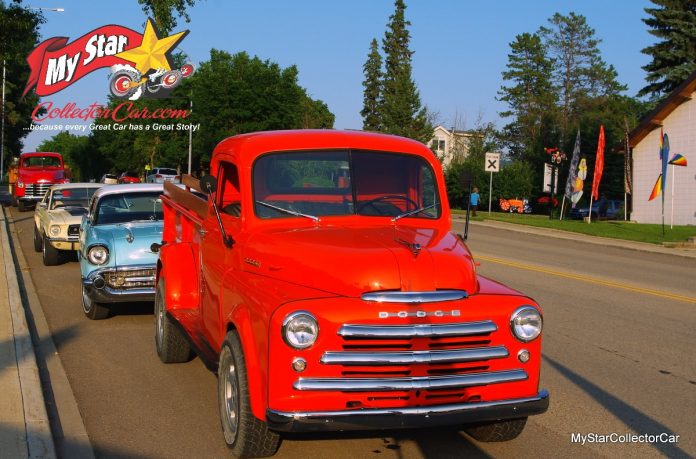 A large-and-in-charge 1949 Dodge 1-ton truck is difficult to ignore at a car show, so MyStarCollectorCar did the right thing and tracked down its owner.

Wayne purchased the truck from its original owner’s grandson after he got the family history behind the big Dodge pickup. The original owner used the Dodge as a delivery vehicle until the truck was no longer able to handle its duties in his business. Eventually it was banished to a forgotten part of his grandson’s rural property.

Wayne decided to resurrect the ’49 Dodge after he concluded the heavy gauge metal on the truck prevented a major rust problem on the truck’s body. However, it had been off the road for many years, so a tree had grown through an opening in the truck.

Wayne wanted to save both the truck and the tree, so he decided to lift the Dodge up high enough to clear the tree. His plan was successful, and Wayne was able to take the truck home for a restoration process.

His next hurdle was a typical car guy problem: Wayne told his wife about the truck after he bought it, but he was able to gain her approval when he agreed to her color choice for the ’49 Dodge. It had a dull and weathered red paint job when he bought it, so her choice was a lively alternative to the truck’s former paint scheme.

As mentioned earlier, the truck’s body was in reasonably good condition, given the long passage of time, so Wayne tackled the mechanical issues on the Dodge. He swapped out the original rear end for a 2005 Chevy truck rear end so he could get a higher gear ratio on the Dodge.

The engine is a vintage Mopar flathead six-cylinder coupled to a floor-mounted four speed manual transmission, a powertrain combination that could be found in a heavy-duty Dodge truck in 1949.

Other improvements on Wayne’s vintage truck include front disc brakes that required alterations to the Dodge’s factory front spindles to fit the new brakes to the 72-year-old pickup.

Wayne also changed to a 12-volt alternator from the Dodge’s original 6-volt generator because it offered more juice and better efficiency. The electric system upgrade was an important component of Wayne’s game plan for his truck because he also got rid of the factory vacuum wipers and installed electric wipers.

Additionally, he installed a conventional signal light system after he removed the lights on top of the Dodge’s cab and replaced the park lights with an integrated signal light/park light system that is current with modern aftermarket technology.

Wayne has owned the ’49 Dodge for the past six years, with four of them spent working on the restoration of the truck. He still has a few future goals, including swapping out the Chevy wheels for something that showcases the Dodge’s Mopar heritage.