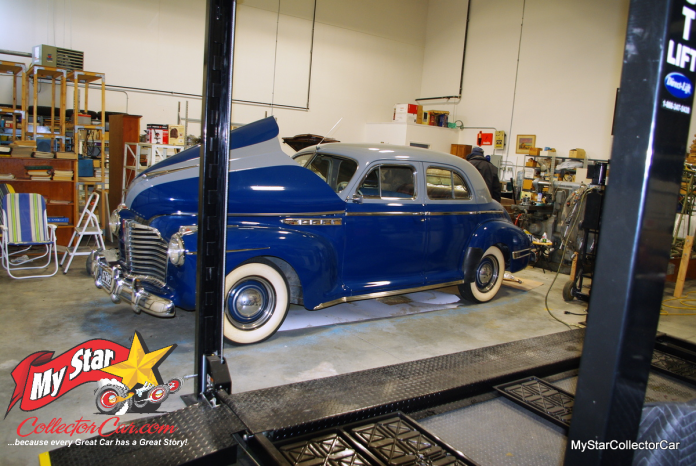 Ted Weale prefers to own stock vehicles and keep them stock. He thrives on originality when it comes to vintage vehicles, including his 1941 Buick four-door sedan.

Ted’s own history includes a long and storied career as a teacher, master mechanic and precision machinist, so he knows how to evaluate vintage vehicles. His ’41 Buick checked off all the boxes in Ted’s world because it was an immaculate car that preserved its automotive history in a grand way.

A 1941 Buick is a rare vehicle in the Canadian car hobby because it represented the last production year for civilian vehicles in Canada. The United States built civilian cars in 1942 before they also shut down domestic car production in favor of military manufacturing.

Ted’s ‘41 Buick is a fully-loaded car that has unique features from that year, including a factory turn signal system that was not available on many vehicles at the time. In fact, sharp-eyed MyStarCollectorCar readers will notice the turn signal switch was on the right side of the Buick’s steering wheel. Even the permanent left side location for turn signals was not yet decided on domestic cars in 1941.

The Buick’s original straight-eight engine received an extra boost from the dual carburetors that were also part of the mix when the car left the factory. The carb setup was both complicated and finicky for mere mortal car guys, but Ted is no mere mortal when it comes to old school mechanical devices.

Ted knew the original dual carb set-up relied heavily upon the primary carburetor, while the secondary carb operated under load, more commonly known as heavy use of the gas pedal. Ted compared the dual carbs to a four-barrel carb in basic primary/secondary function, but he noted the Buick’s engine separated the combustion chambers into 4 cylinders apiece and the secondary carb was not as efficient as the primary in his opinion.

Ted solved the problem when he replaced the secondary carb with another primary carb. He said the higher fuel delivery efficiency provided better mileage and made the ‘41 Buick run “like it was fuel injected”, in Ted’s words.

As mentioned, the Buick is a fully loaded vehicle, including its massive tube radio sound system. The radio even has 5-band shortwave in its list of early 1940s-era automotive features. The Buick’s unique list of unusual appointments also includes a factory compass.

The hood vents are functional and designed to keep the 80-year-old car’s engine a little cooler on the road. The side opening hood release is positioned within the brightwork in front of the vents.

Ted’s longest trip in the car was a 7-hour excursion from his home to Missoula, Montana where he was able to determine his ’41 Buick could still handle longer distances and higher speeds (70-75 mph) with relative ease.

Ted’s teaching career came in handy when he explained the craftsmanship behind his Buick’s emblems. They are not plastic, instead they are cloisenne products made during a bygone era of ingenious metal and color amalgams until they are crafted into the final product. Speaking of color, Ted also acknowledged the two-tone paint job on his Buick and said the GM dealer added the grey accents to the car in 1941.

MSCC FEBRUARY 25 FIVE FOR FRIDAY: FIVE COOL CARS FROM THE...