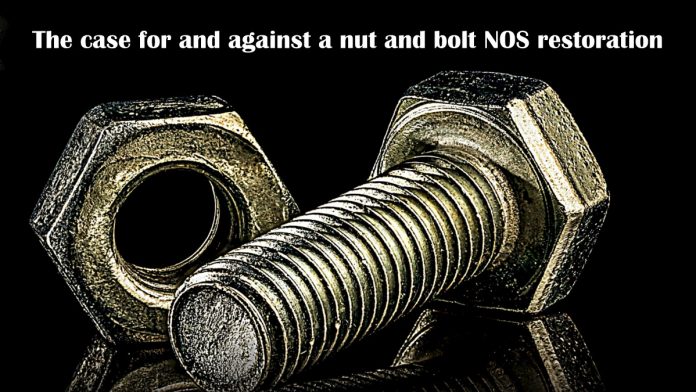 Car guys are historians, but they’re also innovators who believe in upgrades–otherwise nobody would have plunked a bigger engine in a Model T 100 years ago to make it go faster than 40 miles per hour.

The war over 100-point restoration versus modern upgrades gets even bloodier when you start analyzing all the parts it takes to make a car. The nuts and bolts side of a car is one big exponential equation–for you non math guys, that means the number keeps getting bigger the more you undo a car.

100-point restorations mean you have to use the original, date-coded bolt that came with the car or the proper date-coded bolt the factory used 50 or 60 years ago. There are many ways to do this, but in every case, make sure you bring your wallet, because the kind of guys who sell these factory correct, date-coded bolts are going to do things to you that you only read about in prison. It won’t be pretty, and it won’t be fun, but at least your car will be 100% correct.

The case for this kind of detail is similar to the case paleontologists make when they uncover a dinosaur skeleton. The dinosaur skeleton has to be found in the correct sedimentary layer, because if it isn’t in the right layer, a lot of paleontologists are going to blow their cerebral cortexes. The same principle applies to date-coded parts, because if your bolt didn’t fit within that tight 30-day window when they used those exact bolts on the assembly line, you just found a T-Rex skeleton in the wrong layer of dirt.

I don’t have a problem with building automotive historical timepieces because in today’s world of clone cars, there is nothing interesting. Time should never bury the history behind a classic Plymouth Road Runner because in the upcoming world of self-driven E-Cars, society is going to need a break from a world full of soulless drones.

The thrill that 100-point Road Runner gives people 50 years from now is clearly the upside of period correct.

The downside is just as obvious. Time is the enemy of NOS (new old stock) parts. A bolt is unlikely to degrade significantly unless you store it in the Pacific Ocean, but more complex parts like generators and starters need a much gentler environment to survive a 60-year hibernation on a shelf.  A barn in Minnesota isn’t that environment.

Another reason is simple. Maybe that bolt is made out of a better alloy–most aren’t (especially if they have ‘Made in China’ stamped on them), but there’s a chance a new bolt is infinitely better then the one they used decades ago.

Maybe that 60s era thermostat really sucked and now they’ve ironed out the flaws with new tech. 100-point restoration guys won’t care, because their car is only going to travel 35 feet from the trailer to the car show, but there are car guys who like to drive a lot farther in their classic iron.