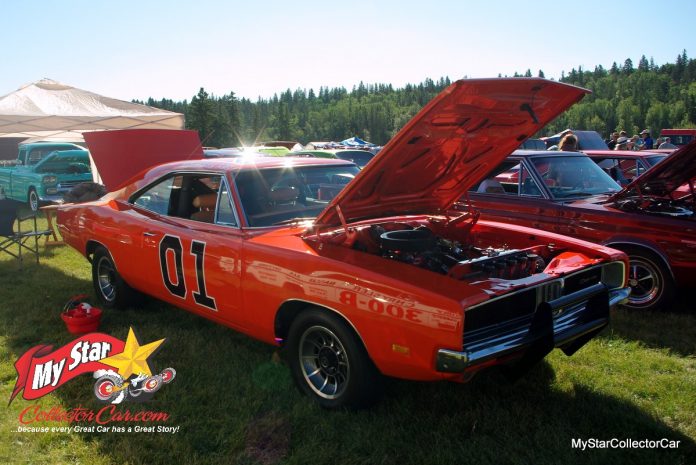 Hardcore car guys are always in search mode, but many are held back by wives who don’t see the magic in old iron.

Jeff Symic is the proud owner of a tribute to the TV version of the General Lee–a ’69 Charger featured in the ‘Dukes of Hazzard’. Jeff was a huge fan of the show plus he’s a hardcore Dukes fan, so his goal was to own one before he was 30 but Jeff said he, “gave up looking”. His wife said the “mortgage is done” so she went out and found one in the States.

Jeff said, “The owner was a little different, so he cancelled a sale and listed the car again”. That’s when Jeff came into the picture. Jeff was sold on the Charger, but the owner had two conditions. He wouldn’t sell the car without the buyer seeing the car in person and he wouldn’t accept a deposit over 100 dollars because he didn’t want to refund a larger amount.

That wasn’t a deal-breaker, so Jeff flew down to see the Charger and bought it on the spot. Twelve weeks later the car finally arrived, and Jeff was the proud owner of a 1969 Anniversary Edition Charger with a 383 factory engine. Jeff said he “blew up the original engine” and that set off a chain of events that “spiraled out of control”, in his words.

Jeff is a Dukes of Hazzard expert, and he realized this Charger was a tribute to the movie version and he wanted to recreate the TV version–specifically the Season One General Lee.

This car didn’t have the console or a roll bar plus the push bar was much narrower on the early TV version of the car. The personalized license plate is even an offshoot of the General Lee’s ‘Lost Sheep’ CD handle.

There were other modifications. The 383 was replaced with a stroked 440 big block so now this General Lee has 500 horsepower at the rear wheels–and now the wheels have radial tires. This Charger is what Jeff calls a family car, so there are two kiddie seats in the back–you can see them if you look past the roll bar.

Jeff said the project came together thanks to the efforts of “some great people” he met in the hobby and specifically in his local Mopar club. The car–not surprisingly–attracts a lot of attention because it’s so recognizable as a TV star, but Jeff is happy to tell people the story behind his car.

A number of cast members have signed the car’s trunk and Jeff said one of them was reluctant, but he dogged the guy outside a nightclub until the actor signed the underside of the lid.

As mentioned earlier, this is a family car, so Jeff’s kids love riding in this legendary Charger. Jeff said, “the little guy calls it ‘Yee Haw’ and the girl calls it the ‘Go Car”. Jeff’s wife is also obviously onboard in a big because she found it and Jeff explained why.