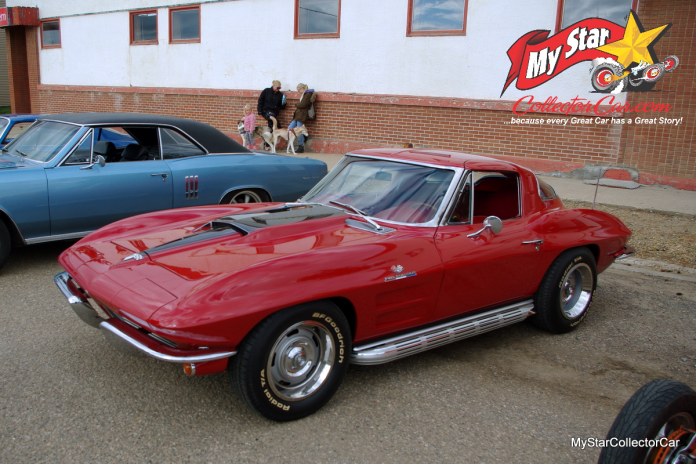 The 1963 Corvette Sting Ray is the gold standard for all Vettes because they were the first year for the C2 era.

The other reason is the split rear window because it was a one-year-only feature for the second- generation Corvette.

Dale Drever is the proud owner of this legendary Vette and he is well-aware of its book value, but that was never the point for him. Dale wanted a driver in every sense of the word. He bought the car about 25 years ago and he drove it for a few years while he mapped out a game plan to build this car from his own vision.

He knew the 327 under the hood didn’t come with the car from the factory so he wasn’t dealing with a numbers-matching car. Dale also knew the white paint on the car covered up the original factory Saddle Gold. He said the car was “pretty rough” when he bought it, so he evaluated the Vette after every trip. Dale said he “fixed stuff” as he went on the car and the project took 15 years, so he was very deliberate in his approach. Eventually, Dale opted for a red paint job because he built the car for himself – not factory-correct guys.

Dale had a pretty basic plan – keep the factory correct look on the outside but upgrade the Vette to 21st century levels under the skin. He started with a 400 small block that gave him a significant 425 horsepower – the 327 wasn’t dumped because it still has a place in his shop, but the extra horsepower is a welcome addition.

This ’63 Corvette has fuel injection badges for a reason – it has new tech fuel injection under the hood. Dale wanted a civilized driver and there’s nothing like fuel injection to whip an engine into finely tuned idle and response. He even gave the fuel injection system and the valve covers a retro look to convey the 60s look for new technology.

Dale also wanted the Vette to handle a lot better than a 57-year-old car, so he removed the C-2 suspension and added a C-5 Corvette suspension with disc brakes at all four corners. He kept the parts, but this ’63 split window does a lot of time on the road – he wanted state-of-the art braking and handling. Dale said the retrofit went well because he only had to drill one extra hole in the frame.

The results have been spectacular because Dale has done some great road trips in his ’63 Vette and it has met every expectation. He wanted a car that looks like a ’63 but handles like a 2020 Vette.

Purists may disagree with the path Dale took but he did keep all the pieces from the original setup. He summed it up in two sentences.