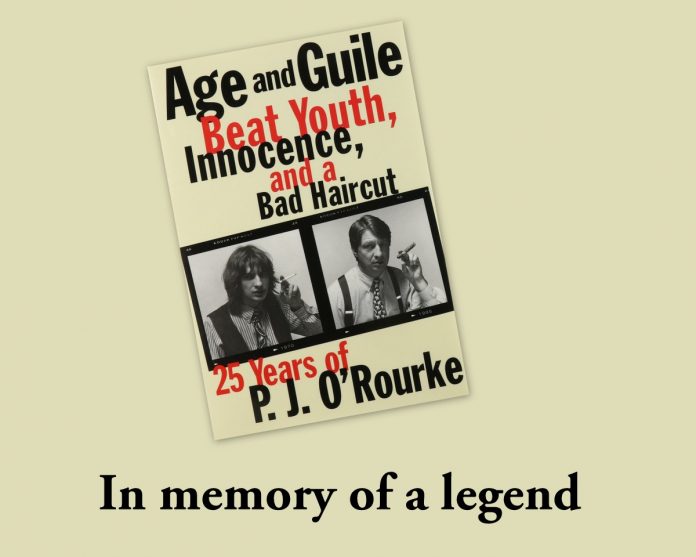 I was in high school when I discovered National Lampoon–P.J. O’ Rourke was a force at that legendary magazine. P.J. was part of a shrinking demographic–guys with English degrees. I’m part of that demographic too, so a guy like P.J. O’Rourke gave us all hope there was a brighter future than being a lifer at 7-11.

I didn’t discover P.J. O’Rourke’s car guy connection until years after he wrote ‘Sgt. Dynaflo’s Last Patrol’ in February 1978 for Car and Driver when he drove a ’56 Buick from Florida to California. I’m going to do the impossible and edit this legendary writer down to my favorite quotes.

He was traveling with an English photographer named Humphrey and this is how the trip started: “We had a cooler full of beer, and there was nowhere in the world that I would have rather been than behind that sailboat-sized steering wheel. Humphrey and I were both in a better mood than anyone over the age of 30 has any right to be in.  We drove 150 miles across Florida like that, and the car looked fabulous and ran perfectly right up until the moment it suddenly quit.”

They ended up in a sketchy bar when the car quit again: “Then just when I was sure we were going to be killed, somebody wanted to know if that was our old Buick out front with the hood up. We said yes, and somehow that made us okay. Trunk lids popped up, tool cases snapped open, and in minutes our engine compartment was packed with fearsome drunk Florida crackers undoing fuel lines, pulling off plug wires, and wrenching on things that I couldn’t see while beer bottles piled up in front of the radiator and spilled out over the grille.”

There was a happy ending: “Finally, Jack rounded up some local fellow who took a big screwdriver, jammed it once into the points, slapped on the distributor cap, and started the car first try. “Used to have one just like it,” he said.”

P.J. had more adventures because this ’56 Buick took the concept of vapor lock and overheating to soaring new levels–but they always had help–even if it was sketchy. “Finally, I got one fellow who said, “Hell, I had one just like it, and I just tore the damn thermostat out. Threw it away. If you ain’t got a gasket, just slap some damn cardboard in there. Damn thing’ll run like hell. I was too embarrassed to admit that I didn’t know exactly where thermostats made their home, but the station owner did.”

The ending to the road trip was just like the beginning–disastrous. “It had taken eleven days and we’d had some kind of breakdown every single day except that last, and when we pulled into Bel Air, Humphrey missed Sargent’s home, went to turn around, and reverse gear gave out. Gave out completely—the Buick couldn’t even be pushed backward.”

P.J. O’Rourke took another road trip two years later in a Ferrari 308GTS. This one was more successful–and a lot faster: “We came by a 930 Turbo Porsche near the Talladega exit. He was going about 90 when we passed him, and he gave us a little bit of a run, passed us at about 110, and then we passed him again. He was as game as anybody we came across and was hanging right on our tail at 120. Ah, but then—then we just walked away from him. Five seconds and he was nothing but an overturned-boat-shaped dot in the mirrors. I suppose he could have kept up but driving one of those ass-engined Nazi slot cars must be a task at around 225 percent of the speed limit.”

I was amazed at how O’Rourke could elevate and demean a Ferrari in one sentence—that’s an art form: “They have their engines in sideways and backwards, and you sit down on the floor where you can’t see your fenders, your feet, or the road. Or that’s the way they seemed to me when I sat in one at the auto show, which was the only time I ever had sat in one. And because they were so funny-looking, I assumed they were hard to drive. Besides, I’m opposed on principle to things with wheels that cost more than $20,000 and don’t have “Atchison, Topeka, and Santa Fe” written down the side. Why, there are people starving in Italy. Or going hungry, anyway. Well, maybe not hungry, but I’ll bet they don’t have enough closet space and the kids have to share a bedroom.”

Nobody could take a car story and weave it into a philosophy better than P.J. O’Rourke : “We may not have Ferraris, but just think what our Polaris-missile submarines are like. And, if it feels like this in a Ferrari at 130, my God, what can it possibly feel like at Mach 2.5 in an F-15? Ferrari 308s and F-15s—these are the conveyances of free men.”

Who else could sum up a truck like this? “A pickup is basically a back porch with an engine attached. Both a pickup and a back porch are good places to drink beer because you can always take a leak standing up from either. Pickup trucks are generally a little faster downhill than back porches, with the exception of certain California back porches during mudslide season. But back porches get better gas mileage.”

“You may also want to know if a pickup truck is truly useful. I’m afraid the answer is yes — all too much so. But, when all is said and done, it really would have looked silly at the end of Easy Rider if Peter Fonda and Dennis Hopper had been shot by a couple of guys in a Fiat Brava. And what’s life for if you never get a chance to shoot the likes of Peter Fonda and Dennis Hopper? Besides, you’ll never really appreciate the profound and astonishing beauties of nature if you don’t get stuck in the woods now and then. And you won’t appreciate them half as much if you don’t have a lot of beer along.”

Jim wrote a MyStar piece about P.J. O’Rourke back in 2011. I have to admit–he made a solid case for a tie with the legendary Uncle Tom McCahill for excellence in automotive journalism.

Thank you P.J. You made a solid case for car guys with English degrees.