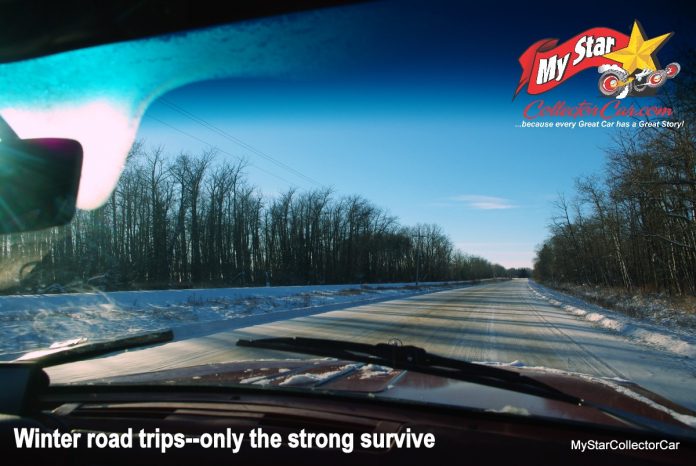 It is a typically brutal winter up here in the Great White North.

Most car guys in our part of the world have already read their beloved old rides a bedtime story in October and tucked them in for the winter.

However, there are a handful of car guy outliers who are willing to keep their retro rides on the road during the wrath of winter. These car guys are winter adventurists who want to drive their vehicles in a hostile and unforgiving winter environment where both car guy and retro ride will be tested in a big way.

There was a bygone era when old cars were driven on a year-round basis, regardless of the season, but they were new cars at the time and a big part of the owners’ transportation needs. Most retro rides now enjoy lengthy winter vacations in 2022, mainly because they have earned a warm holiday after all these years. But some owners choose to drive them during the winter season.

Most car guys would categorize these outlier owners as certified lunatics, but we at MyStarCollectorCar admire these winter daredevils for their sense of adventure and sheer audacity. In fact, they inspired us to join them in their reindeer games and take a 59-year-old car out on the road during a prolonged winter cold snap in our region.

The temperature hovered around -24 C (about -11 F) in our region that frigid day in early January 2022, but the old car fired up immediately, even though it was not plugged in and had not been fired up since November of last year. Just to clarify the “plugged in” reference, the old car is definitely not an electric vehicle, but it does have an engine block heater that needs to be plugged in for cold starts during deep freezes.

We immediately hit the local freeway and headed down the road on a 55-mile (90 km) cold weather adventure in the ’63. The highway was icy on the entrance ramps and required a certain amount of caution to ensure the car did not kick out on the drive side of the conventional rear axle, but it was a minor driving adjustment that became a non-issue when we hit the freeway’s bare four lanes.

The car’s cabin was warm, but the old ride’s defrost system was unable to clear the side windows and rear glass at highway speeds, so the two fender-mounted side mirrors played a critical role in the driving experience. There was barely enough visibility to discern vehicles in the other lane during a shoulder check lane change, but the traffic was thinner than normal, given the winter conditions. Additionally, the rear-view mirror inside the car was just an ornament because of the frost on inside of the rear window.

It became clear (pun intended) to us why so many motorists put window frost shields on their vehicles during the winter months in our area when the old cars were new. In fairness, the heater systems inside the then-new cars were not almost 6O years old.

Nevertheless, an afternoon drive in an old car on a cold January afternoon that panicked brass monkeys in a big way was a simple recipe for a great day in our humble opinion here at MyStarCollectorCar. A day that made us understand why a handful of car guys embrace the challenge of a winter driving experience.

Carry on gentlemen, you have earned our respect.