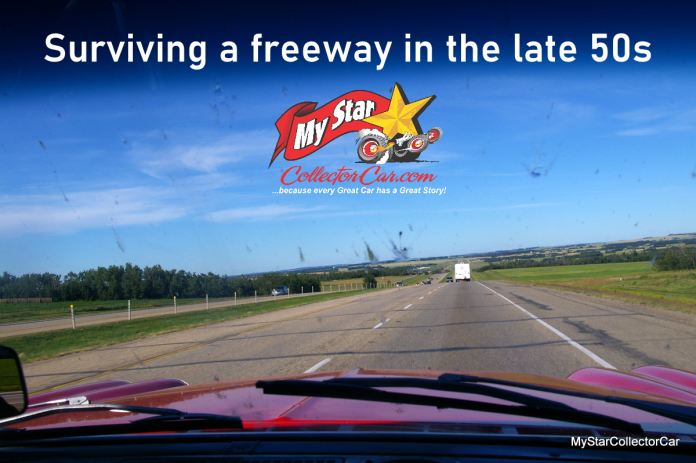 ‘Science and Mechanics’ was a monthly automotive publication that stepped into the ring with other notable car mags like ‘Mechanix Illustrated’, ‘Popular Mechanics’ and ‘Popular Science’, to name a few of their competitors in 1958.

The August 1958 issue of ‘Science and Mechanics’ contained a then-timely article titled ‘Speed on the Super Roads……Do You Have 65 MPH Judgment?’

The interstate roadways were bigger and faster routes for motorists during the late 1950s-and so were the new cars from that era. The big dogs on Detroit’s automotive porch were brutes with over 300 horsepower under their hoods.

The new freeways were built for higher speeds with posted limits of 65 mph (almost 105 km/h for the metric crowd) in most cases and the ’58 car models could easily hit that number on the road. In fact, the beefy V-8s could push the cars past 100 mph (about 170 km/h in metric lingo) with relative ease.

The high-speed angle was covered by the big horsepower cars-but there were also complications produced by the higher speeds, including handling and braking issues, along with the new reality of faster road paces and more traffic for drivers with no freeway experience.

‘Science and Mechanics’ offered a freeway survival tutorial for its readers when the August 1958 issue hit the newsstands. The article described many of the potential hazards that might be new to the typical driver in 1958 who was more accustomed to the slower pace of a two-lane roadway in the United States.

Faster cars on faster roads required a different skill set so the title question about 65 mph judgment was enough to grab ‘Science and Mechanics’ readers’ attention in a big way in the August 1958 issue. The magazine utilized the collective road wisdom of two professional drivers, including a championship truck driver and a test pilot for Ford Motor Company.

Both men had logged plenty of time behind the wheel of vehicles and were able to describe the art of driving in expert terms. The newer and faster four-lane roads presented new challenges that were outlined by the drivers and the writer behind the piece.

Some of their concerns have been altered by the passage of time, massive improvements in automotive safety engineering over the years, and modern drivers’ basic experience at high speed driving on busy freeways, but everything was different in 1958.

Therefore, the margin for driver error on the new superhighways was smaller in 1958 so the article outlined some of the potential road hazards. The main issue may seem eerily familiar to today’s driver: the moron who cuts you off in traffic and creates complete havoc in the exchange.

The article wanted readers to become aware of these menaces before they caused mayhem on the road and put other drivers at serious risk. The stakes were higher in 1958 because the cars were not equipped with adequate brakes or steering by comparison to today’s drive-by-wire vehicles, so the crash possibility (via inferior equipment) was higher during the late 1950s.

The article also cautioned against “fatal monotony” episodes where long miles at a sustained high speed on a featureless expressway could lull drivers into full sleep behind the wheel-or a semi-awake state that compromised motor and cognitive skills-sometimes to a deadly degree during this non-seatbelt era.

One of the more interesting points made in the article discussed a clean or dirty car and its effect on long distance trips. According to the article, the glare from the hood may be enough to compromise driver vision by sunset and created a road hazard for them.

The ‘Science and Mechanics’ piece must have been an eye-opener when it first appeared in August 1958. Its points are still valid in 2020, but heavier traffic on the roads have given modern drivers more experience with crowded, faster freeways.

The last improvement for today’s drivers compared to their counterparts from ‘58?

Better safety equipment and emergency medical aid have given the 2020 drivers a better chance at survival if (or when) they screw up on the roads.