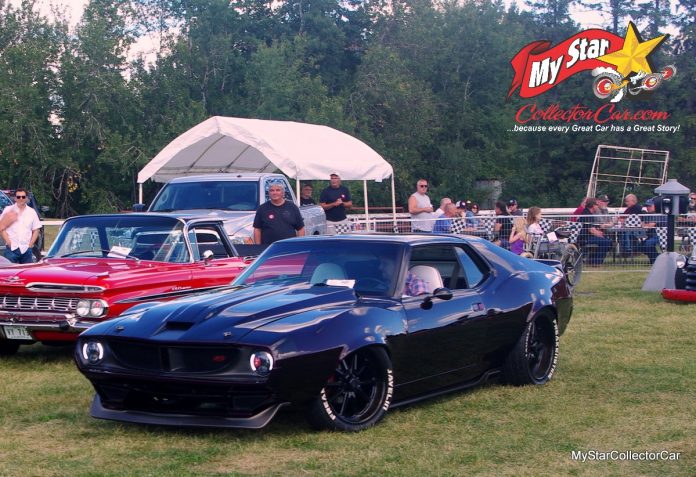 American Motors got into the pony car game in 1968 when it introduced the AMC Javelin and its smaller two-seater AMX stablemate.

The new-for-1971 Javelin style was a complete departure from the previous years and became a solid foundation for the creative custom style of Eddie Freake when he transformed his 1972 Javelin into the appropriately named “Freaken Stein”, an amazing and well-planned resto mod.

Eddie is a paint-and-body-man by trade, so he was able to bring plenty of talent to the table after he bought the car about 4 years ago. He designed the custom Javelin in his head and then Eddie began to build his resto mod for the next 3 ½ years.

Eddie bought a 2010 Chevy LS1 engine and bolted it up to a 2007 Chevy 4-speed automatic before he installed the GM powertrain into the ’72 Javelin. The mechanical transplant was complicated because the powertrain was not an easy fit and required the services of a skilled computer guy to sort out the electronic challenges when Eddie chose a 21st century powertrain for his 51-year-old Javelin.

The mechanical upgrades also included a Ford Explorer rear end and four-wheel disc brakes to slow down all those new horses under the Javelin’s hood.

The first item of business for Eddie’s custom look was the Javelin’s hood because it required more height, so he modified it to accept the engine and provide extra fresh air for greater efficiency–plus it just looks cool to onlookers.

Sharp-eyed MyStarCollectorCar readers will notice the Eddie’s custom modifications extend to the rockers on the Javelin. Eddie custom-built wider and longer rockers to accommodate his custom exhaust system. He also had to channel the frame to accommodate the unique exhausts, plus he built the system because local muffler shops wanted a ton of cash to build it.

The project required a donor frame from a ’73 Javelin that was rusty-but had a good sub-frame, so Eddie used a 1972 Javelin body shell for the custom build.

Eddie added flared fender wells so his Javvy could accommodate wider tires and tucked the bumpers into the body to give it a sleeker look. He also raised the Javelin’s windshield from its factory location to enhance the overall custom design.

The interior of the Javelin has undergone a complete makeover, including new monogrammed (FS for Freaken Stein) white and purple leather on the original seats, along with an overhead console custom-built by Eddie. His Javelin now starts with a push button located in the console.

However, Eddie did not add AC to his Javelin resto mod project because “I’m more of a windows-down guy”, in his words.

Eddie told MyStarCollectorCar “I knew what I wanted in my mind’s eye”, but later added, “It was a crazy experience”–a massive understatement when one sees the quality and creativity behind the finished product.