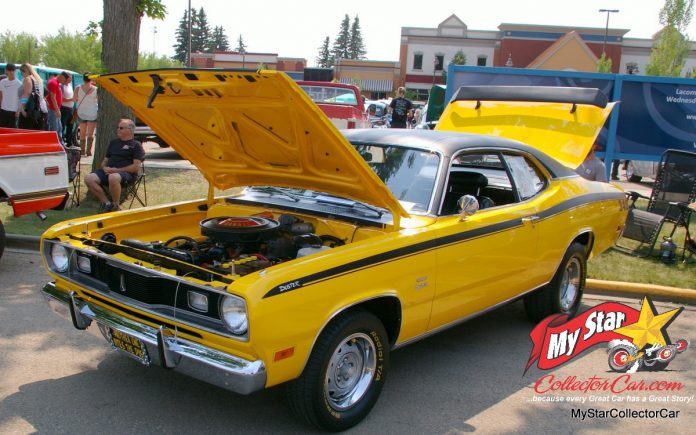 Doug Penney is no stranger to 1970 Plymouth Dusters because his first car was a ’70 Duster.

Nevertheless, Doug began a search for the perfect ’70 Plymouth Duster and was able to purchase one about 20 years ago.

Doug decided to preserve the Duster-with a few tweaks to improve its performance and style. The factory 340 in the Duster was stroked to a 416 cubic inch small block, although Doug kept the factory version’s original cylinder heads just in case any plans to restore it back to factory specs are on the table in the future.

Not surprisingly, the Duster now breathes easier due to its headers, but Doug kept the original exhaust system in another just-in-case decision.

He added a full gauge package to the Duster because the car’s factory set of warning lights did not give him enough information about the reworked 340’s critical information under load. Doug also added a tachometer so he could avoid over-revving the engine.

The ’70 Duster is cosmetically similar to the factory version, including its bright yellow paint job, but Doug put a period-correct vinyl roof on his car to accentuate its overall style. Doug built subtle upgrades into his Duster because he “built it to look stock”, in his words.

Doug concluded his Duster’s extensive restoration was enough reason to reset the odometer since it was basically a new car after the project’s completion. His mileage numbers indicate Doug has put about 300 to 500 miles a year on his 1970 Duster, most of them accrued during pleasure trips in the car.

MyStarCollectorCar encountered Doug and the ’70 Duster at a summer car show, so it was clear these events made his shortlist of pleasure trips in 2021. He mentioned another example: trips for ice cream in the car.

JANUARY 2022: A 1971 FORD BRONCO GETS PUT OUT TO PASTURE FOR 20 YEARS BEFORE IT BECOMES A RESCUE PONY