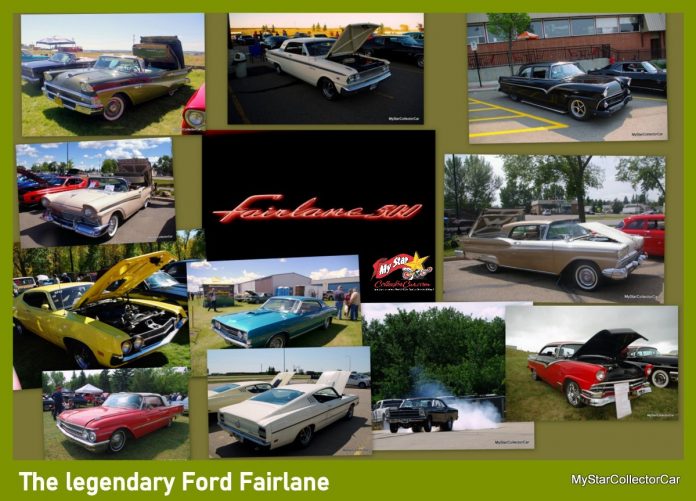 Henry Ford was an entrepreneur and innovator who was able to combine the two business strengths into one of the most successful automotive companies in the world, namely the Ford Motor Company.

Ford parlayed the mass-produced Model T into an affordable and runaway success during the early days of automotive manufacturing. Consequently, the Model T catapulted Henry Ford into fame and fortune in a big way.

The Ford Motor Company decided to honor its founder’s property when it introduced the Ford Fairlane in time for the 1955 model year. The Fairlane replaced the Crestline name in the Ford car model lineup and began a long production run that began in 1955 and ended in 1970.

In between were several ebbs, flows and changes to the Ford Fairlane over the ensuing 15 years.

The debut of the 1955 Ford Fairlane also marked a major style shift in domestic cars, so the ’55 Ford models looked very different from their 1954 predecessors. The style difference was intentional because Ford wanted to separate itself from the earlier half of the 1950s and move into the future with the ’55 Fairlane.

The new look 1955 Ford Fairlane’s overall style was extended into the 1956 Ford’s style with some trim and grille changes to separate it from the earlier model Fairlane.

The next major style change occurred in 1957 when the Ford Fairlane underwent a complete facelift and introduced a brand-new look in Ford showrooms. The tailfins moved to a slightly more horizontal position while the headlights extended out from the front fenders. Even more striking was a metal roof that disappeared into the trunk in some ’57 Ford Fairlane models.

1958 marked the introduction of the dual headlight phase for many domestic cars, including the Ford Fairlane. The rear deck of the ’58 Fairlane was also radically different from the ’57 model and covered more of the back of the car in a stretched oblong circle configuration. The 1958 Ford Fairlane also had a tin roof version that disappeared into the trunk.

1959 Ford Fairlanes had a new style that was unique to that year but were clearly related to the ’58 model. However, the 1960 Ford Fairlane was a radically new design for the car. The dawn of the 1960s pushed Ford to a sleek new look for its Fairlane models, a style that celebrated the new decade with a body fin that began at the front of the car and ended at the rear.

1961 Ford Fairlane models distinguished themselves from their 1960 predecessors with a new look that included a new front grille and retro taillights that had a 1959 Ford vibe to them.

A major shift in Ford Fairlane world occurred from 1962-64 when it was demoted to intermediate car status and shrunk to a smaller size in the Blue Oval lineup. Ford’s big dog was the full-sized Galaxie, but the Fairlane’s smaller size made it a natural ¼ mile track car (including its legendary Thunderbolt model) over the next few years.

1966 marked another style shift for the Ford Fairlane. The ‘66 Fairlane’s headlights and taillights shifted from the 1965 Fairlane’s horizontal position to a vertical headlight and taillight system on the newer models. This new look extended to 1967, with minor trim changes, in similar production fashion to the virtually indistinguishable 1955-56 Ford Fairlane models.

The 1968 Ford Fairlane returned to horizontal front headlights and a bold array of model choices that heightened the overall style of the newer models with fastback roof designs on their option list, among other new design features.

The 1969 Ford Fairlane kept most of the style cues of the ’68 models, but the car’s rear taillights were re-designed that year.

1970 spelled the end of the road for the Ford Fairlane, but many believe the ’70 Fairlane headed into the sunset with one of the coolest overall styles ever offered by the Blue Oval people. The 1970 Fairlane’s pointed front fenders enhanced the overall style of the car, particularly in fastback form.