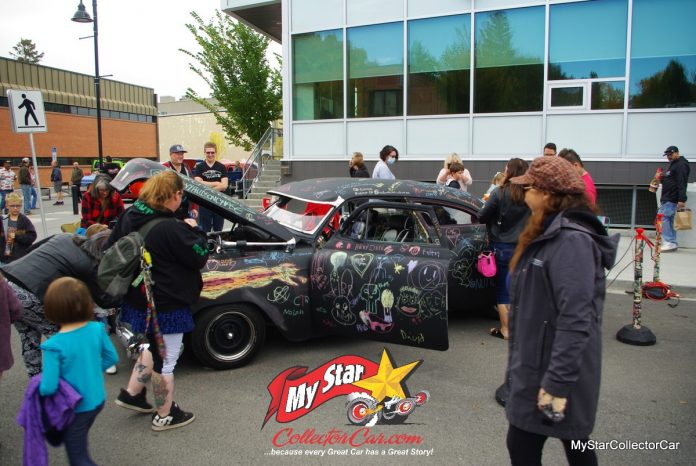 Most classic car owners are like a mother bear protecting a cub because a major investment in the car means you have to protect it from harm.

The story began when Carol Germain saw a ’49 Merc at a car show–it blew her away. She loved the roofline on these classic era Mercurys, and she totally understood why they were so popular with custom car guys when they were new. That popularity was a double-edged sword because the ’49-51 Mercs are some of the most expensive cars from that era–even in project form.

Carol didn’t give up the search–she just looked for something that captured the look of the ’49 Merc, but with a much smaller price tag. She found a ’54 Chevy 210 with a ’50 Hudson roof–it was the perfect look for Carol’s concept of an affordable ’49 Merc custom.

This was a project in the works so the whole family–husband Bernie, son Andrew and daughter Lydia jumped into the game. They bought the car in 2019 and had it on the road by 2019.

Bernie and Lydia focused on the 355 Chevy small block. It was bored 30 over and now it’s a supercharged beast. The engine wasn’t built for a supercharger–that was an afterthought on Bernie’s part–so now he has to keep the boost down or the small block might turn into a grenade.

Carol and Andrew worked on the interior and there’s a distinct comic book theme–specifically a Punisher theme. The door panels are actual comic book panels, and the rear seat has the Punisher logo built into it.

The seats are from a Camaro and the instrument panel and console are full of gauges to tell the driver how the small block is performing. The best part about the panel–the original clock still works and keeps perfect time.

There’s a ’78 Camaro 3:73 rear end and Nova front clip so this ’54 Chevy handles like a much newer car. The windshield is stock ’54 Chevy but it’s tipped back to fit the new roofline. Bernie said the glass guy had the old windshield out in two minutes. The wheels are from a BMW–Bernie has a buddy with a tire shop and he let Bernie take home several samples. The BMW wheels fit the best and looked the coolest.

Bernie’s family built this car to drive it and it’s been worth the effort. Bernie said, “The car handles great and it’s fun to drive but it’s a little loud at 3200 rpm on the highway”.

The real fun with this Chevy begins at every show. The car is painted in chalkboard paint so the family hands out chalk and encourages people to sign their car. This Chevy is a kiddie magnet because they can  write on the car–plus everyone can sit in it and honk the incredibly loud horn.

They wash the car after every show, so they get new stuff on the car–some professional artists have put their work on the Chevy. The paint has to be redone two or three times a year but it’s worth the effort for one big reason.