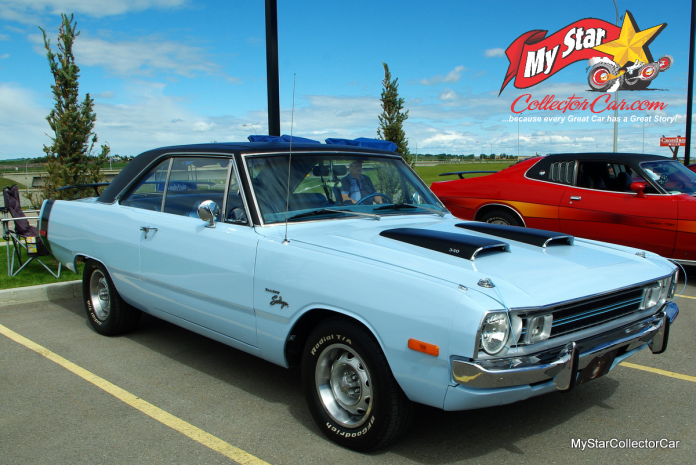 Randy Nesbitt has been there and done that in the go-fast department over the years.

The search for the right vehicle came to a happy conclusion for Randy when he purchased a 1972 Dodge Dart Swinger two-door hardtop earlier in 2020. The Swinger was a nimble little Mopar compact that offered V-8 performance in a small package if the buyer wanted to head in that direction.

Randy’s ’72 Swinger left the factory with a small block under its hood. The reliable original engine provided adequate performance for the Swinger, but lacked the muscle to build its reputation as a solid street machine.

However, Randy’s ’72 Dart was equipped with a 360 small block engine, the successor to the 340 in the Chrysler family history. The car’s original engine was replaced at some point in its past, but this Swinger has 340 badges on its hood scoops-even though “It now identifies as a 360”, joked Randy.

The Swinger still has its original column-mounted automatic transmission that can easily handle the 360 now under its hood. An unusual factory feature in the car is its bench front seat because most two-door hardtops would have bucket seats instead of a bench configuration.

Randy pointed out some of the upscale factory features on his Swinger, including its 3-speed wipers, dual master brake cylinder, fender-mounted signal indicators that face the driver, extra rear view mirror on passenger door, vinyl top and rally wheels, to mention a few of them.

The Swinger’s striking blue paint scheme also draws plenty of positive responses from women. The car was repainted in its factory paint code at some point in its past and still looks like it just left the booth. Randy also noted the Swinger’s door jams were still in their original factory paint.

The ’72 Dart still has all of its factory body panels because it was originally an Oregon car, presumably from a dry region because Randy noted it still has Oregon sand in it, according to him. The car was also undercoated, and Randy was impressed with how well the Swinger’s undercarriage was preserved over the past 48 years.

Randy also liked the way his Swinger handles the heat and pointed out his car never runs hot, even though it still has its original fan and radiator. He added the car shows 32,000 miles (about 51,000 kms) on its odometer and he believes the Swinger is an honest low-mileage car, because “it’s beautiful to drive”, in Randy’s words. He added modern headlights because the factory lights “weren’t great”, plus he did a little blue paint upgrade to the front grille to tie the whole factory blue car together.

MyStarCollectorCar mentioned earlier that Randy has already lived the fast life on the track and street during his younger years but these days he is happy with the lively performance offered by his stylish 1972 Dodge Dart Swinger.