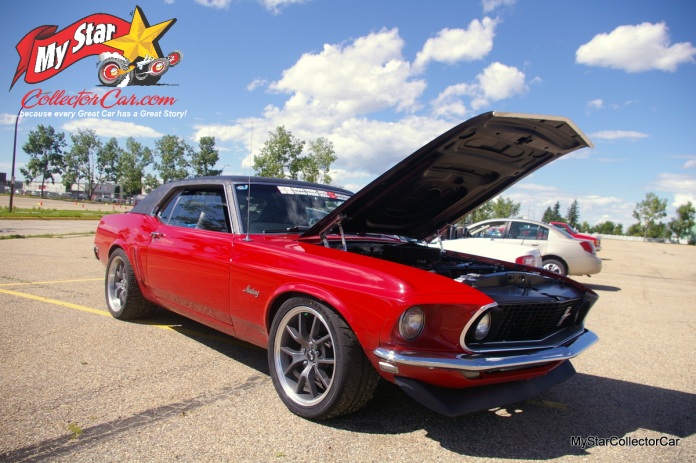 Bob Guido is the kind of car guy who embodies the spirit of adventure in a big way, whether on the track or on the road.

Bob is the proud owner of a wild 1969 Mustang that used to be a mild-mannered 302 car with just enough power to get the pony from Point A to Point B in a reasonably fast manner by most standards.

Just not Bob’s standards when he became its owner about 10 years ago.

Bob has always felt the need for speed and needed his Mustang to gain some serious giddy-up so the car could meet his much faster velocity requirements.

Bob owned a GTO at an earlier point in his life before he sold the car to his brother. Eventually he wanted to buy the Goat back from his brother but he had already sold the car, so Bob had to consider another option.

At the time Bob owned a Fox Body Mustang and decided to check out the ’69 Mustang on his way home. The Mustang’s previous owner agreed to take the Fox Body plus some cash for his classic pony car and Bob became its new owner.

A tame Mustang was not in the long-term plans for Bob, so he began to transform the pony into a raging stallion. A stroker 351 Windsor (427 with EFI) fit the bill under the hood for Bob and gave the ‘Stang a new bad attitude. Bob added an aftermarket T-56 six-speed manual transmission to corral all those extra horses under the hood and melt the car’s rear hooves upon request.

Then Bob decided to take his car on the quarter mile track circuit and chose an unusual way for the ’69 Mustang to attend races: Bob drove the car to the track, including a 2013 Hot Rod Drag Week meet in St Louis, Missouri. Bob lives in northern Alberta so it wasn’t exactly a short commute to the races. In fact, it was about a 4000-mile round trip-not including a side trip to Bowling Green, Kentucky in the Mustang.

The 2013 Hot Rod Drag Week event was a big misadventure for Bob because he crashed the Mustang into both walls during a race. Here’s the video.

The only good news was Bob won the race, plus he was able to cobble the car back together and compete for the next few days in the ¼ mile competition. Then he drove the car back from the Bowling Green junket to his northern Alberta home.

The Mustang underwent another transformation after the St Louis mishap. Bob installed a much tougher front and rear suspension for the car, along with a roll cage and race belts to replace the lap belts in the car.

MyStarCollectorCar caught up to Bob at an autocross event that offered a new driving challenge to him. The Mustang has enough upgrades to be competitive in this style of competition-and Bob was pleased with the car’s performance.

The autocross event took place about six hours away from Bob’s home. It should come as a surprise to no one that Bob drove his ’69 Mustang to the autocross in considerably less than six hours.

Just for the record, he doesn’t even own a car trailer.