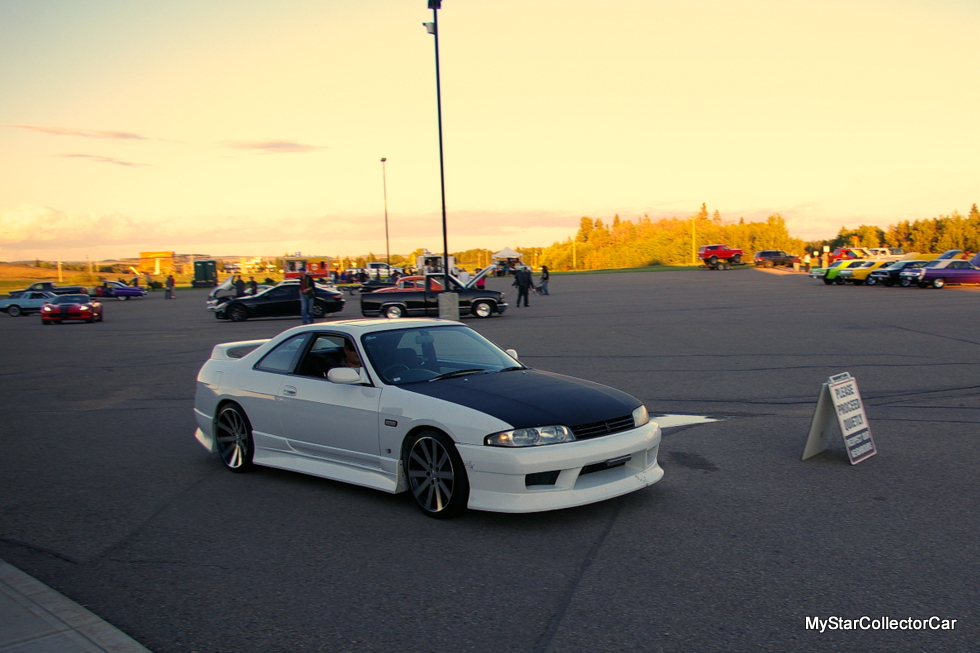 Tuner guys are well aware of the bargains that are exported out of Japan.

‘You can pick up an incredible ride with only one condition attached—you have to live with right-hand drive in a left-hand drive world.’

Some guys make the transition easier than others. 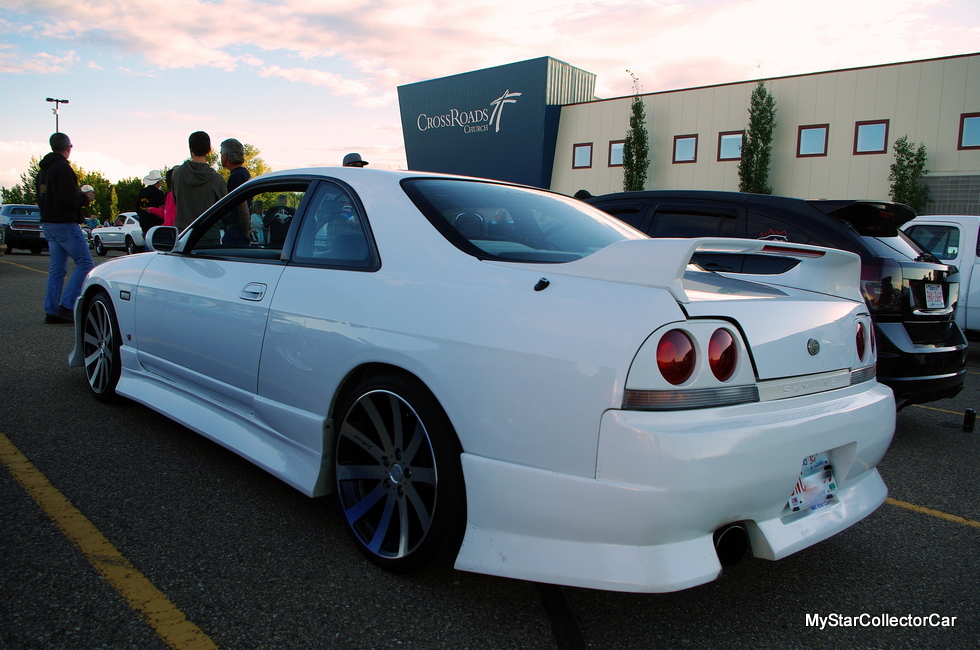 Sean Coughlin was one of those easy transition guys. He bought a 1995 Nissan Skyline GTS-t three years ago and he adjusted to the right hand drive like he was born to it. In a sense, Sean was born to it because he’s left-handed and he “liked the left-handed shift—it was fun”. 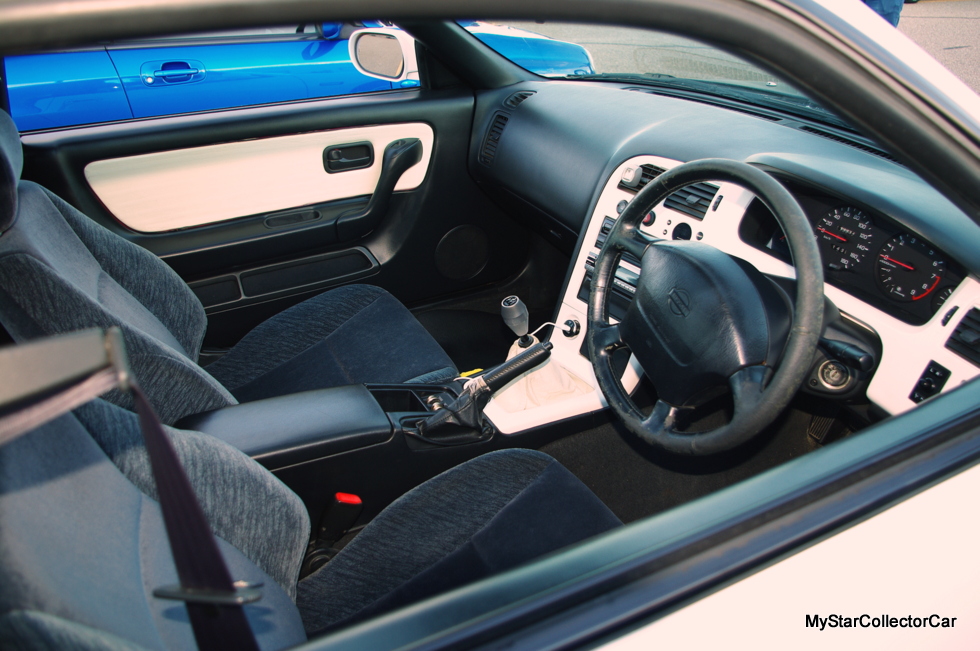 Sean has been a fan of these Nissan Skylines since he was a kid. He said, “I couldn’t believe I own a car I used to play on video games like Gran Turismo”. Sean was patient in his search for a Skyline and he found one that had already gone through the import process. Sean explained how these cars have to be over 15 years old to import and there’s a solid supply of them thanks to some peculiar Japanese emission laws that require some serious cash to get older cars re-commissioned. 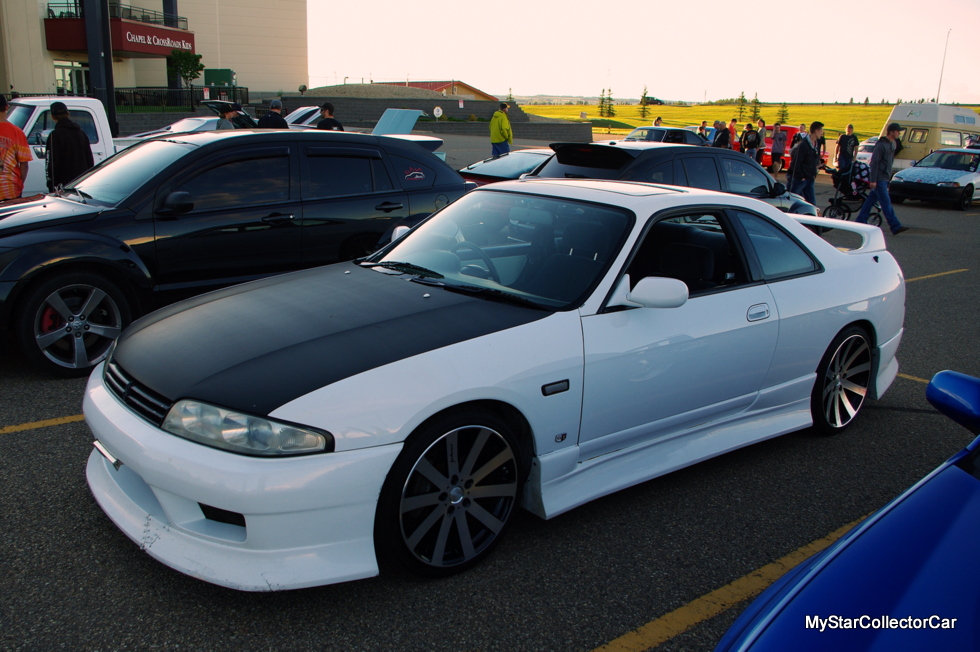 After these cars are imported, there’s a fairly stringent safety on this side of the pond – basically “everything has to work”.  Sean said there’s “a whole bunch of stuff needed for importing these cars” and the previous owner “couldn’t afford it”.

Sean was happy to solve the former owner’s problem so he cut a deal for this legendary Nissan. The details list was long but solvable so this car became a permanent fixture on Canadian roads. Sean described it as, “ you gotta be a driver to drive this car” because it has no ABS or traction control. The upside of lower tech is the lack of a few things like a passenger side airbag so he can have his son riding shotgun without breaking any laws. 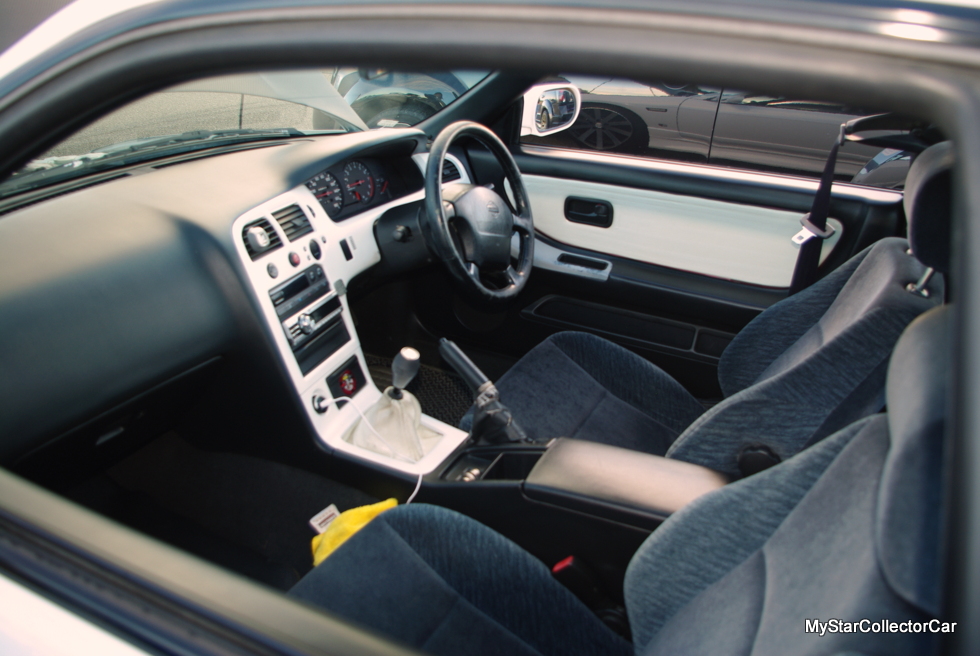 This is a high-performance car. Sean described it as a “de-tuned sports car” because it still has a fantastic power to weight ratio with at “least 250 horsepower” and for about “3K it’ll easily go over 300 horsepower with bolt-on horsepower”. That’s a few years down the road because for now this Nissan is almost a daily driver. It has seen winter roads and Sean said the “heater is good” and it’s really stable on the road—the only limitation is a deeply rutted street. He also said he “loves the rain”—again because of the stability and it “saves a car wash”. 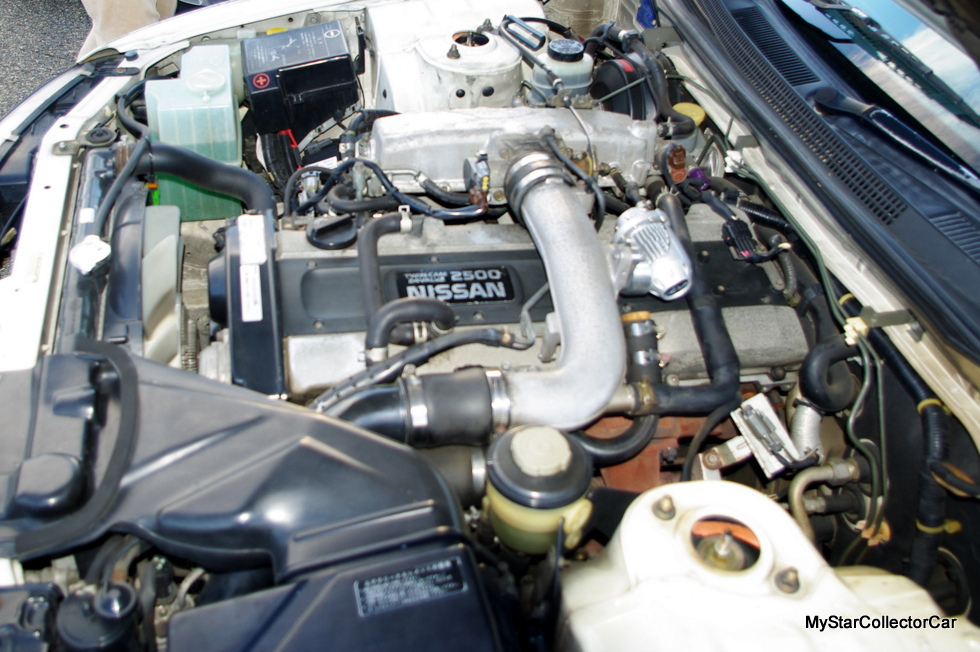 There are a few limitations to these cars. Sean can’t get hail insurance and it’s really tough to get parts. The other thing is the location of the steering wheel because certain traffic situations are really tough from the wrong side of the car. 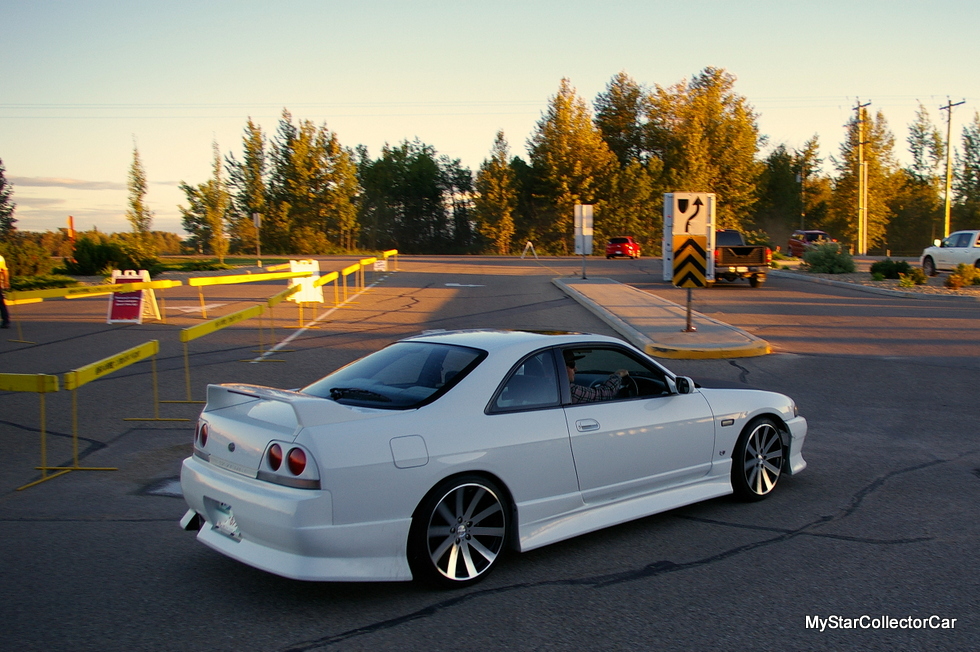 Passing on a two-lane is a serious challenge and Sean admits he’ll get on the shoulder for a better look if he’s driving solo. Left hand turns are a big issue so Sean “waits until the intersection clears” before he makes a move. 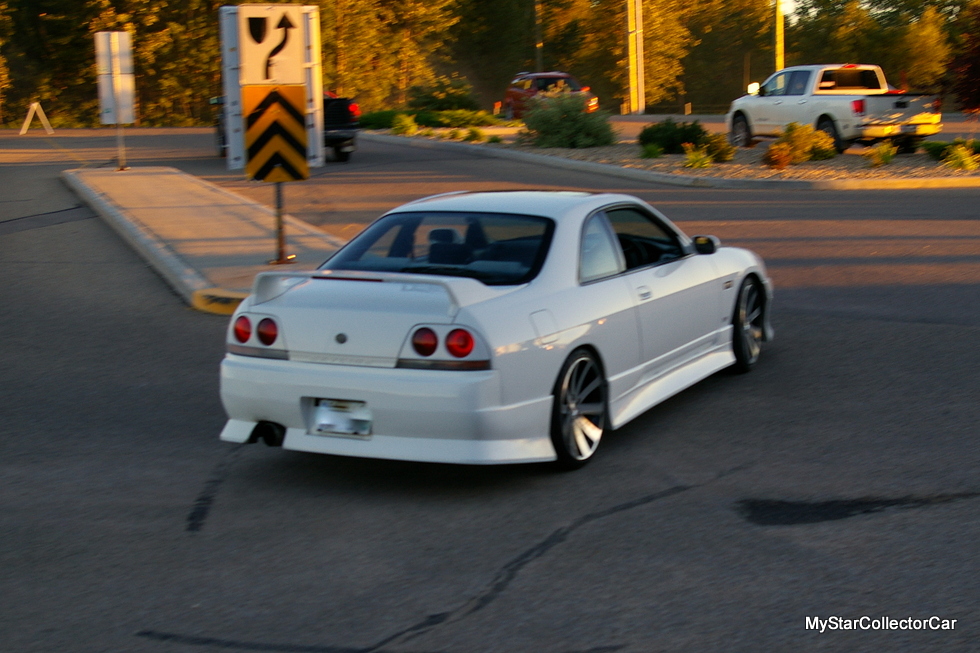 Sean described his car as a “sleeper” because of its white paint and he’s happy about that because he doesn’t want a lot of attention in his Nissan Skyline GTS-t. Sean likes to fly under the radar in this car because he likes the stealth approach as much as one other thing. 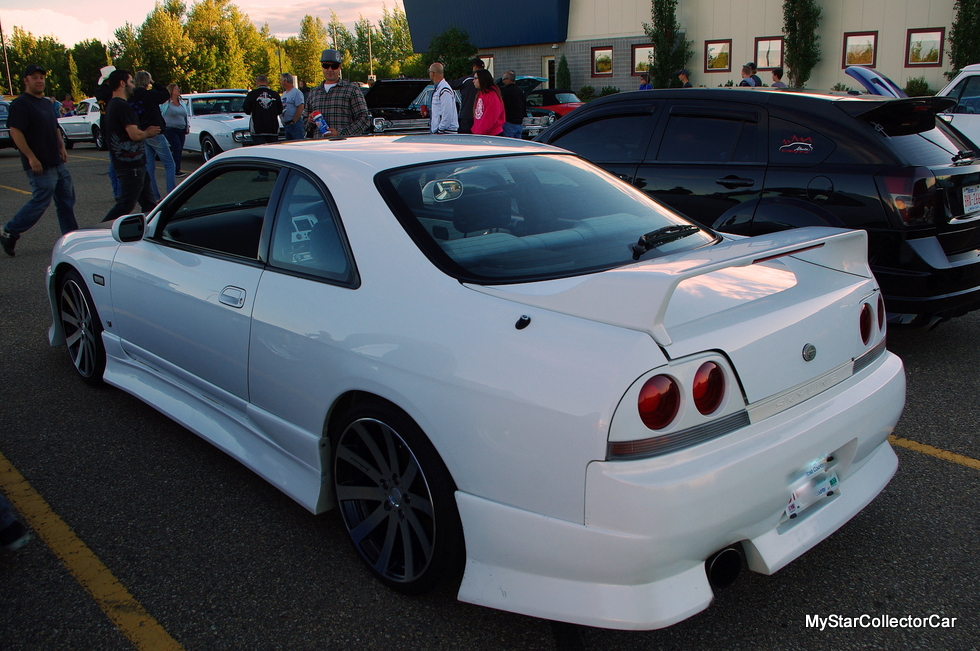 ‘He loves that left handed shifter.’

MSCC JUNE 19 STAR OF THE DAY: A FOX BODY MUSTANG WITH A GREAT MESSAGE