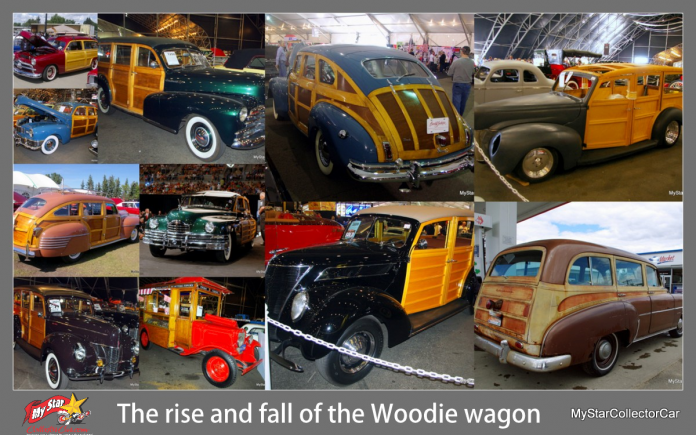 There is some debate about the correct spelling when it comes to Woodie or Woody station wagon.

The use of wood was not uncommon for the early automotive era and could be found as part of the frame hidden underneath a metal skin in many vehicles built during the early days of the horseless carriage. The wooden components were used in abundance on the earliest vehicles since most of these rides were not particularly fast in stock form.

The debut of Woodie wagons meant some of the wood components could be found on the exterior of the cars and gave these vehicles a stylish upgrade in the appearance department. The use of metal in automotive production was now commonplace, but some consumers wanted wooden features on their cars’ exteriors. Enter the Woodie wagon, although it should be noted some domestic auto manufacturers also used exterior wood on their high-end sedans and convertibles during the Woodie years.

However, the Woodie wagon remains the flagship model for the movement, even though they were an extravagant choice for consumers during their heyday.

Perhaps one of the most famous Woodie wagons was built by Ford shortly before the United States entered World War Two, specifically Fords late 1930s and early 1940s Woodie models. The craftsmanship behind a typical Woodie built during this era involved intricate wood construction techniques because the vehicles’ bodies were largely constructed from hardwood behind the wagon’s metal front doors.

The generous amount of wood trend would shrink during the post-war era because domestic car manufacturers wanted to shave costs and use more metal in their vehicles. For example, Ford’s new look 1949 models were also the first Ford Woodie wagons to use a metal body frame instead of a wooden body frame during assembly.

Nevertheless, the panels on the new Shoe Box (1949) Ford station wagon still had a wooden element wherein the wood exterior was fastened to the metal panels on the wagons. The result was a hybrid station wagon that answered the bell for the Woodie fans who still wanted real wood on their wagons.

Eventually the build cost of wooden structures in any form on a station wagon worked against the bottom line so Detroit began to phase out the actual use of wood in a Woodie wagon by the early 1950s. Buick’s 1953 Super Estate and Roadmaster Estate Woodie wagon models were the last domestic production cars to use genuine wood during their assembly.

The post-wood station wagon versions used metal and early types of plastic as replacement material for the real thing on their Woodie wagons. The result was satisfactory in terms of appearance and cost, but the use of real wood will always be a high-water mark when it comes to Woodie wagons.

Many members of the Baby Boomer and Generation X will remember the use of vinyl material designed to resemble wood on the side of station wagons and minivans built during their kiddie years.