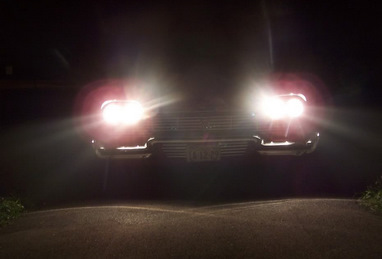 We couldn’t do a scary ride edition at MSCC without talking about this blood red hell spawned, “killing machine with fins” creation from the twisted mind of Steven King.

This demonic ’58 Fury is an icon for car people and non-car people alike.

Donnie Taylor has a classic story behind his ‘Christine’–many thanks to the man with the scary red and white Plymouth. 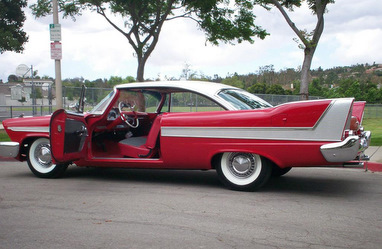 Donnie told us this car was originally a two-tone red and white ‘57 Savoy that was sold new in Jefferson City, Tennessee.

In 1987, in a Christine-like scenario, the original owner had a heart attack behind the wheel and crashed the old classic.

Then another tragedy occurred when, as Donnie told us “I was young with no real money or place to work on her so I like an idiot I sold her”. He spent the next 10 years wanting another 2-door hardtop but the search was full of bad leads and cars that were way out of his price range. 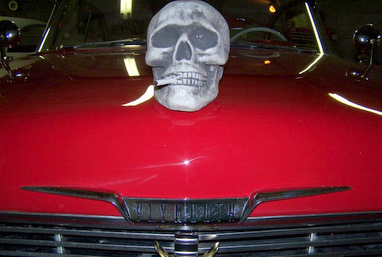 He did find a ’58 4-door sedan, the bridesmaid format choice of car guys all over the world and through a local ad for a bumper he found the 57 Savoy he’d sold 10 years ago. Donnie told us: “it cost me a 71 Mach-1 Mustang and an 86’ Mustang GT drag car but I was able to get her back” and  “with the help of the 58 4 door I had some parts found here and there and I was able to turn her into ‘My Christine’ over the next 8 months. He told us that it’s not 100% movie correct but it does have the film standard 1981-84 GM code 75 Spectra red and Iceberg white roof (arterial blood red wasn’t an option), Remington G-78 14 wide white tires, front plate (CQB-241), stainless pencil cut exhaust tips, dual 4 barrel carbs, and body color lower front valence. These are Christine must have options”.

Donnie has become the go-to guy for Christine clones-he has five in his shop right now and he has shipped them out to international addresses. Turns out this Christine worship crosses borders around the world. 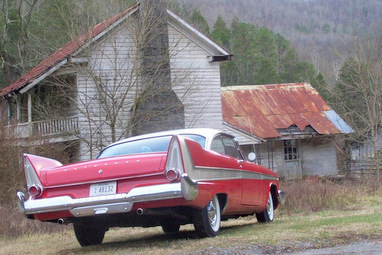 Any fin car in 2009 gets an incredible amount of attention but cloning a movie star car like Christine is like bringing Pam Anderson to a Safeway parking lot and wondering why all these guys are hanging around.

Donnie and his wife Portia drive their celebrity to shows all over the place and they truly enjoy their status as bit players with a Hollywood star at every stop on the trip.

Donnie is a member of http://www.forwardlook.net/  – a great site for the Exner era fin cars.

HOW TO AVOID STORMY WEATHER ON A WINTER CAR PROJECT