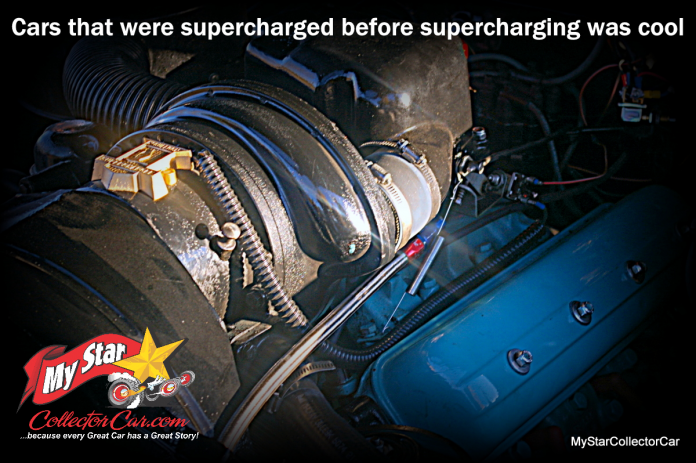 The 1937 Cord is a great example of an early supercharged car—there were earlier cars with superchargers, but the ’36-37 Cord 812 was an excellent example of how a builder wanted a little extra performance via a huffer.

Cords were large, heavy cars so the 288 cubic inch inline-8 under the hood was overpowered by the sheer weight of these cars. The supercharger bumped the horsepower up to 170, so the Cord became a 30s-era rocket. Unfortunately, there was a Great Depression going on at the same time, so Cord faded to black—but not before they left an automotive technology legacy of front-wheel drive and supercharged engines.

Ford was in a bloodbath with Chevy in 1957 after GM introduced fuel injection to the horsepower game. The small-block Chevy thumped the Ford, so the Blue Oval guys brought a McCulloch supercharger to the fist fight between number one and number two in Detroit. The ’57 Thunderbird was one of the targets.

They didn’t build many so an F-Bird at any auction will hit sky-high prices, while non-supercharged ’57 T-bird prices flatten.

Ford offered the supercharger across its model lines, but there were very few takers.

For example, they only built 27 1957 Victoria two-door hardtops with the F-code supercharger option.

Those numbers put you below hemi-Cuda build numbers, so real-deal F-code Ford prices are climbing faster than an F-15 at an airshow.

Ford wasn’t the only supercharged production car in 1957. The upstarts at Studebaker wanted something to compete with the Big Three but they only had 289 cubic inches under the hood.

The cavalry came over the hill when Studebaker added a McCulloch supercharger to the mix.

The ’57 Golden Hawk became a beast overnight with its 275-horsepower rating—suddenly the humble little Studeys were thumping guys all over the place in street wars.

Studebaker never forgot how well the supercharger performed so they came back to the concept in 1963 with the R-2 Avanti. The Avanti was a lightweight, fiberglass-bodied sports car aimed directly at the C-2 Corvette Sting Ray.

They used a Paxton supercharger in the second incarnation of the supercharged Studebaker, so these little rockets had a very respectable 289 horsepower—14 more than the Golden Hawk.

Avantis were much lighter, so the performance was off the charts. A factory Avanti easily topped 160 miles per hour and hit 178 in a one-way run so these huffer Studebakers were untouchable.

Supercharged cars are found in many mainstream cars since the 1980s and they still do the same thing—turn average cars into something above average. There’s one big difference between them and the five cars listed above.

They’ll never be as cool.