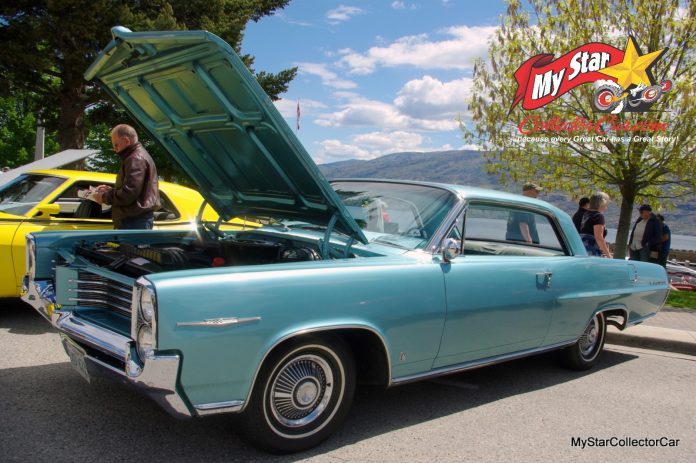 In fact, the current owner of this low-mileage 1964 Pontiac Parisienne admitted he was looking for a ’64 Chevy Impala. Chris James bought the car in 1995 during his search because he was sold on the car’s history. He was looking at another ’64 Pontiac with more options–but it had more miles too, so he opted for the lower-mileage Parisienne.

The Pontiac was originally bought at Bowell McLean in Vancouver, BC Canada and Chris believes the owner rarely drove the car during her tenure as an owner.

She opted for a pretty basic package with a 283 2-barrel under the hood. She didn’t run up the miles, because at this point the Parisienne has only averaged 1000 miles a year since new.

The second last owner was a grandfather who bought it for his granddaughter. He completely overestimated her enthusiasm for the Poncho, so the car was back on the block when Chris found the ad. This time the ownership took because Chris has no intention of parting with a car he’s owned for 27 years.

The years have been kind to this Pontiac, but it still shows the wear and tear you’ll see in cars over time–even if they don’t see the road very much. Chris said he “replaced just about everything” so there’s a long list of things done to the car.

The engine had the seals done and the carb was rebuilt but there was nothing major with the 283 small block. The biggest testimony to the engine comes with its compression numbers because they are 140 PSI at every cylinder. That’s a nod to the low mileage and detailed maintenance on the car.

The underneath of the Pontiac was completely re-done, so now there are new springs and front-end parts–plus brakes on the car. It definitely retained its factory ride height after all those upgrades.

Chris had nothing to do when it came to the interior because this Pontiac still has mint seats and door panels. The rear seats had a protective cover on them, but this car looks like someone just redid the seats–it’s that nice. The Pontiac has had two repaints–the last one was under Chris’s watch in 2007.

Chris loves the driving experience–he said it “runs like it was new”. He lives with the wind noise because the vent windows allow more road noise than what you’ll see in new cars, but that’s reality with a 59-year-old car. He’d like a little better gas mileage because the thrifty version of the Chevy small block doesn’t equate well in 2022.