Doug Frechette is only the second owner of this rare little import from England.

His 1961 Vanguard spent most of its life with a school teacher who bought the car from a Buick dealership 51 years ago.

‘The Vanguard was considered to be a high end vehicle in Mother England where it garnered a reputation as a “banker’s car”.

In fact the Vanguard was comparable to a 1961 Buick in price when the original owner purchased it, but she wanted something a little different and the Vanguard fit the bill to a tee. 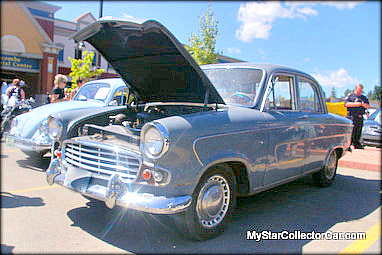 Doug purchased it from an estate sale when it became available. The generous original owner wanted the proceeds from the car’s sale to be applied to the cost of a new pool table for a seniors’ center that was a part of her retirement years.

Doug loves the history of cars so much that he spent 4 years as an employee at the world renowned Reynolds Museum in Wetaskiwin Alberta Canada. That experience made him aware of the rarity of his Vanguard, a car that may well be a one-of-a-kind import to Canada.

In fact, this ’61 Vanguard has a factory installed 1957 Vanguard dash because the company did not make any left hand drive dashboards past that year. There was no demand for these cars in North America, so Doug’s 1961 Vanguard is a very unique vehicle because it has no documented factory mates with left hand drive. 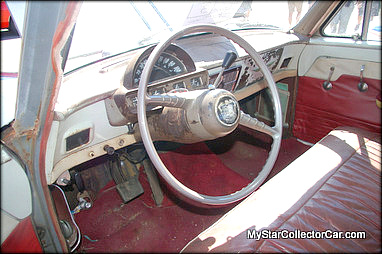 Doug’s car is very original and still has all of its factory features, including all of the original tools that came with the Vanguard. It is a true survivor that has some paint rubbed off the left front fender from the original owner’s cat.

Apparently the cat used to perch on the fender to look through a window and spot the original owner when she came into view in the house.

Doug discovered the history of the Vanguard automobile mostly through contact with an Australian club that loves these cars and knows a lot about them. 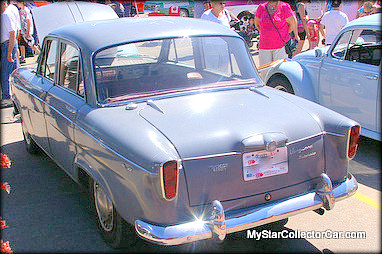 Doug has driven the car about 3200 miles in 2 years and is happy to report that his Vanguard has none of the famous electrical issues that seem to plague the British cars from the past. He can drive his Vanguard at comfortable highway speeds in the 70 mph (110 kph) range “all day” in his words.

That is somewhat surprising performance for a car with a TR3 four-banger in it, but we assume that the automatic transmission eases the RPM burden on the little engine. Doug also explained that 99% of these cars were sixes, so that makes his Vanguard even rarer in the grand scheme of things. 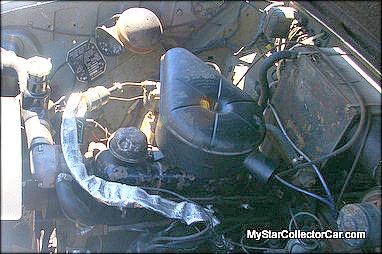 Other options include 2-speed wipers, heater and a dealer installed radio. The car also has a one gallon reserve gasoline tank–or petrol reserve in the parlance of the Brits.

This car is thoroughly British and its rarity brings a lot of curious onlookers when it is at a show. It is a good thing that Doug is one of those friendly and knowledgeable owners who is very happy to answer any questions about his very rare Vanguard.

Doug is the right guy to own this car and we wish the two of them many happy miles together in the future.

Here’s some more information on these cars thanks to Bill Watson, a very astute and well-informed reader.

“Vanguard, Imported by Buick. Buick imported the German-built Opel, as Pontiac imported the British-built Vauxhall and Chevrolet the Envoy. The previous owner may have purchased the car from a Pontiac-Buick (not Buick) dealer, but Buick dealers did not import or market Standard cars. Which probably means the previous owner purchased a used vehicle. The Standard was imported from Great Britain and was built by the Standard-Triumph Motor Company. The Standard Vanguard was redesigned for 1956 when it switched to unibody construction. The base model was the Ensign while the Vanguard was marketed as the Vanguard III. 1961 was the last year for the four cylinder Vanguard, the last one built in August. The Vanguard Six went into production for the 1961 model year in October, 1960. The last Vanguard Six was built in May, 1963, with 9,953 built during the 2½ years it was in production. The Standard car came to an end in 1963. Should also point out that the Vanguard III did not have a TR3 engine, but the Vanguard 4 engine. The TR3 used a small bore version of the Vanguard 4 engine. The Vanguard engine, first introduced in 1948, used a 2088cc engine with a 85mm bore and 68bhp. The TR3A had a 83mm bore for 1991cc and 100bhp with dual carbs. The automatic transmission was the U.S. Borg-Warner T35, same unit as used by Rambler and Studebaker. I have the 1959 brochure for the Vanguard III. Surprised to see his in a single tone paint scheme as two tone was standard with only black in single tone. Standards were imported and sold in Canada through to 1963, all with LHD. The instrument panel may be the same as 1957, but it was used right through to 1961. LHD and RHD models used the same instrument cluster, it was just mounted on the ‘correct’ side of the car“.