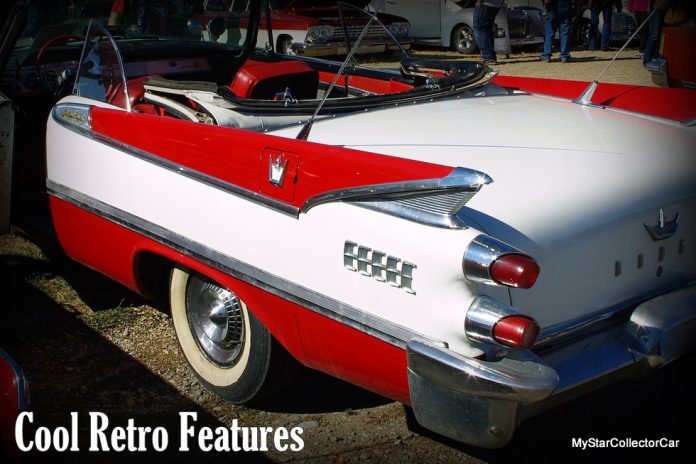 The cars from the past represented a bygone era in style and innovation, sometimes even at the same time, depending upon the vehicle.

We at MyStarCollectorCar decided to pick five of our favorite features from vehicles from the cobwebs of automotive history.

One of our favorite items were the turn signal light indicators placed on top of the front fenders on 1960s and ‘70s cars. For example, the fender-mounted turn signal feature was an item on most of the higher end Chrysler products (including some of their trucks) during this era.

No information was provided about whether the fender-mounted turn indicator option was helpful for people who drove for great distances along straight roads with a constantly flashing signal light and wanted to avoid older driver stereotypes in this department. Nevertheless, we at MyStarCollectorCar believe the fender-mounted turn indicators were a stylish addition to any retro ride when they were brand new.

The same conclusion could be applied to MyStarCollectorCar’s second choice for cool retro features: whitewall tires. Whitewall tires were a symbol of lavish excess during a bygone automotive era when issues like a full-on economic depression (the Dirty 30s) and a huge investment in an excessive number of kids (the Baby Boom) got in the way of a whitewall tire purchase for the average car owner.

The simple fact is whitewall tires, and their sporty siblings red wall tires, really dressed up a car in a Sunday-go-to-meeting-clothes way. The stylish tires enhanced the overall look of a car and even helped dress up the chrome-challenged low-end cars from yesteryear.

MyStarCollectorCar’s third addition to our list is the T-top. The T-top has its domestic production car roots in the 1960s with the debut of the 1968 Corvette Stingray. The ’68 Corvette was a radical style departure from the ’67 Corvette and the semi-convertible design of the T-roof was a major addition to the new look Vette.

The concept of two removable roof panels attached to a center bar caught fire with other brands and eventually the Corvette had plenty of company in this removable roof concept. The T-top roof became a staple in the Big Three battle for the sporty car title and the flashy style was refined over the years by the boys from Detroit, along with a handful of imports that eventually manufactured T-roof rides in other parts of the globe.

The fourth item on MyStarCollectorCar’s list is the tail fin. These iconic additions to the aft section of cars from the back nine of the 1950s defined the automotive era in a way that had never been matched since the first horseless carriage swaggered down the street and put many suddenly-retired nags out to pasture or herded in the general direction of the nearest glue factory.

Finned cars took off like a rocket during the early days of the Space Race and captured the public’s attention in a big way during their brief orbit in automotive world. Sadly, fin cars crashed and burned in popularity by the dawn’s early light of the 1960s and the cars lost their tail fins due to popular demand for their removal.

MyStarCollectorCar loves the anachronistic style of fin cars because these rides looked like a custom job right out of the factory. Now these scarce cars from the last days of Buddy Holly are cooler than ever in 2019 because of their outlandish fins. Well done Detroit-well done.

The fifth and final addition to MyStarCollectorCar’s list is the hood ornament. The days of magnificent hood bling are long behind us but there was a time when hood jewelry ruled in the automotive kingdom.

Hood ornaments were an art form for the creative members of the automotive world and these Motor City Michelangelos ran with the challenge.

We at MyStarCollectorCar are not the go-to guys for the artsy side of the hood ornament equation-but we know cool when we see it-and a well-designed hood ornament is off-the-charts cool, so hood ornaments were an easy choice as the last item on our list of cool retro features.