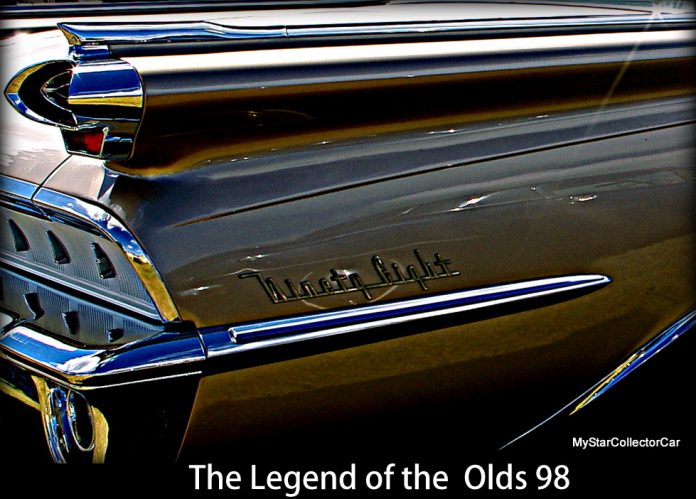 One of the hallmarks of the Oldsmobile brand was its perch near the top on the General Motors luxury car scale of ascending automotive elegance.

Simply stated, the Olds models were not quite Cadillacs, but they were better than a garden variety Chevy on the Jones (of “keeping up with” fame) scale of General Motors models.

The Oldsmobile may not have been as upscale as a Caddy-but they lived in the same gated neighborhood.

The big dog on the porch was the Olds 98 models for many decades. The 98 (or Ninety-Eight) was the flagship for the Oldsmobile division and occupied the penthouse position for their land barge models.  Land barge was an appropriate term for the cars because the 98 models were huge cars that barely fit into parking spaces and had a serious addiction to gasoline.

The 98s were built for a rising star in the pursuit of affluence and sent a strong message about their owners: “I may not have completely climbed the ladder of success, but I can easily see the last rung on it”.

An Olds 98 owner demanded more luxury items in his purchase and these cars offered plenty of them right from the factory, along with a solid list of automotive upgrades in the option department.

The earliest models were built during the early stages of the Second World War and included a roomier cabin area with a column-mounted transmission that eliminated the floor shift and gave the middle front seat passenger more personal space uncompromised by the driver’s shift habits.

The big Olds models also offered more power in the form of a straight 8-cylinder engine and continued this trend during the post-war years until Oldsmobile developed its famous Rocket OHV (Overhead Valve) V-8 engine in time for the 1949 models.

The early 98 models were equipped with creature comforts like cigarette lighters, rear armrests and even had factory electric clocks by 1947.

The important part of the equation was Oldsmobile’s ability to offer extra comfort and style that reflected a customer’s success in the daily rat race.

The dimensions of a typical Olds 98 were bigger than a Chevy and on the same scale as a Cadillac during the early years. The larger width and length of an Olds 98 delivered a smoother ride than a Chevy and its extra horses meant modestly powered cars would disappear in the 98’s rear-view mirrors rather quickly on the highway.

The most important part of the Olds 98 philosophy was their designers’ willingness to provide automotive advancements whenever the opportunity arose for them. Big ticket items from the early 1950s included windshield washer systems, dome lights, power steering and even an automatic headlight dimmer.

The Olds 98s were also adorned with a generous amount of bling over the years because excessive amounts of chrome and stainless steel on a car indicated the owner paid more for their luxury ride and wanted to show the world.

The Olds 98 was always a stately car and this trend became even more evident through the years as automotive styles evolved into a new era. The giant Olds 98 models of the 1970s and early 1980s represent the pinnacle of the large-and-in-charge philosophy from this marque.

The Olds 98 will always occupy a special place and time in automotive history because these models were always an upscale member of the GM family.