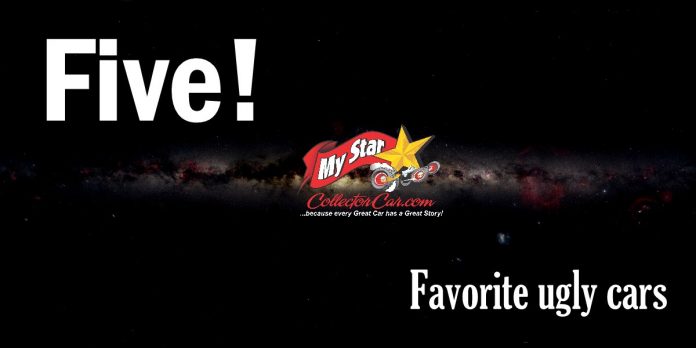 Over the years, there have been many cars that were beauty-challenged in a big way.

Our list will not include the Edsel because that notion is a debatable point and a faddish default position for many car guys in MyStarCollectorCar’s opinion. We liked everything about the Edsel–with the notable exception of its insanely complicated electric push-button automatic transmission. Now that’s a horror story worthy of Christine.

The first car on our ugly car list is the bullet-nose Studebaker Commander built between 1950 and ’51. These cars were unconventional to say the very least, particularly in their two-door Starlight coupe models because these non-beauties had an unusual rear window design with multiple glass panels that wrapped around the rear quarters.

The net result was a car that looked like it was coming and going at the same time, save for the bullet- nosed front grille to identify the direction. Just for the record, we at MyStarCollectorCar love this bullet-nosed beauty.

The second member of our ugly car club is the 1961 Dodge, affectionally known as a “plucked chicken” in car guy circles. The term refers to the car’s lack of tailfins because they were hastily amputated after the 1960 model year.

The ’61 Dodge was consistent in overall design because it was homely on both the back and front end, thus the car really did not have a good side in the eyes of its beholders. Nevertheless, the 1961 Dodge could readily be described as unique by its disciples here at MyStarCollectorCar.

The Mother Mopar DNA ran deep in 1961 because the third addition to our list of likable ugly cars is the ’61 Plymouth. The rear tailfins were also unceremoniously hacked from the 1961 Plymouth, so it was also labeled a “plucked chicken” by car guys.

Most people did a double take when they spotted a 1961 Plymouth on the road during the Kennedy era, mainly because of its odd appearance after a long production run of finned beauties from the fine people at Mopar. However, the 1960s was a new age for domestic car makers, so the Finned Age was as outdated as silent movies in the grand scheme of things for domestic car builders. Our number 2 and 3 choices are grim proof that Chrysler panicked when they built 1961 Dodges and Plymouths. But you can count us here at MyStarCollectorCar as loyal fans of this small flock of “plucked chickens”.

The fourth member of MyStarCollectorCar’s ugly-but-lovable car list is the 1958 Lincoln Continental. This car embodied everything that made the back half of the Fifties arguably one of the most interesting eras in the history of automotive design.

The ’58 Lincoln Continental was an automotive overdose of bling, generous chrome, fins, wildly sculpted body lines, more bling, massive size, and even more bling. The overall result was a jaw-dropping monument to excess that looked like nothing else on the road because it was the Starship Enterprise in a world of shuttlecrafts with fins. The 1958 Lincoln Continental was a true chrome-bathed beauty in our eyes here at MyStarCollectorCar.

The fifth and final addition to MyStarCollectorCar’s ugly duckling car list is the 1950-52 Nash Rambler, affectionately known as the “Bathtub on Wheels” because of its overall style. The Nash cars shared this basic tub design during the late 1940s and early 1950s, but their smaller Rambler models seemed to emphasize the unusual body cues.

One of the major partners in the Nash car company was Kelvinator, a company that built its legacy in the home appliance industry. The refrigerator-like style of the 1950-52 Nash Rambler indicated the Kelvinator people won their share of design arguments at the boardroom meetings.