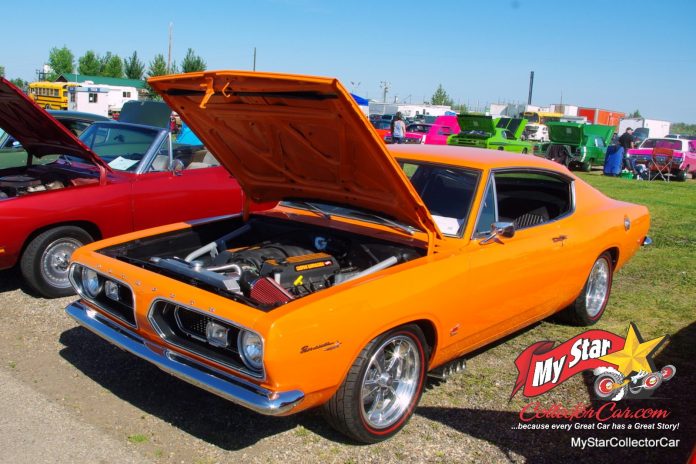 Hot Wheels may have been the single biggest automotive influence on kids who grew up in the late 60s and into the 1980s.

Coleman Powell was one of those kids. His favorite (since the age of thirteen) was the Redline 1967 Barracuda Custom Hot Wheels car—he never lost his love of all things Hot Wheels, so when the time came Coleman decided to recreate his favorite toy in real life.

He found a great candidate in Redding, California eight years ago. It was a 1967 Barracuda that was basically sound, but it was tired. The car had never been out of Redding in its life, but after Coleman bought it, he headed north to build his dream car.

There was a 440 in the car, but Coleman ditched the big block in a favor of a 5.7 hemi. That engine option was short-lived, because Coleman found the perfect donor—a 6.4 hemi out of a Challenger donor car.

Coleman used a lot of the Challenger parts including the console—but because everything ties together,  there are still a few issues to sort out in the ECM, ABS and PCM to get this car functioning at 100%. Coleman said the car was “pretty wild” even in second gear–so he’s looking forward to working on the full potential in the Barracuda.

The rear deck is another example of how detailed this car is because it looks factory. Coleman said the easiest thing to do would be a back half (custom rear chassis section), but he wanted to retain the factory rear passenger area so he could carry his young daughter in the car–she’s a huge fan of this Barracuda.

The solution was a mini-tub and a custom-made rear deck area. It’s a little narrower, but untrained eyes will never spot the difference if they aren’t looking for it. The back half also was upgraded to a four-link rear suspension.

The front end was also upgraded to a hi-tech tubular suspension, steering and aftermarket brakes. This upgrade lowered the Barracuda’s weight so it’s a lot lighter than a stock ’67 Barracuda fastback. Coleman estimates the 6.4 Hemi is running at 500 horsepower (before future upgrades) so the power-to-weight ratio is in the stratosphere.

The key to the theme of this Hot Wheels tribute car is to get the details done correctly. For example, the car has Hot Wheel-style zoomies poking out of both front fenders and the valve covers tell you this is a Hot Wheels engine. The redline custom wheels and tires are also true to the Hot Wheels vision of a Gen II Barracuda.

Coleman has two ideas he wants to add to his car. He wants to make the hood bulges more obvious because they are more prominent on the Hot Wheels Custom Barracuda.

He also wants to turn the trim strip on the rear deck into a full-sized taillight to recreate the red stripe on the back of the toy car.