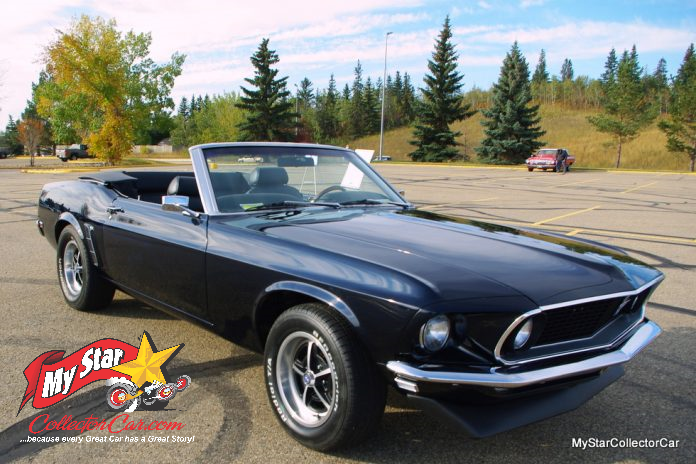 A 1969 Mustang convertible has a long history with one family that goes back to 1976 when a then-14-year-old kid named Peter Stirling became its owner.

Young Peter was excited about the car and purchased it for the princely sum of 400 dollars.

The car was equipped with a tired 351 Windsor so Peter replaced it with a fresher 302 small block. Like every car kid, he learned to drive his first car and the lessons included generous bouts of stunt driving performed by a freshly minted teenaged driver/test pilot.

Eventually Peter moved to a different phase in his life and his pony car was retired from active duty roughly 10 years after he purchased it. Few car guys are fortunate enough to keep their first car and Peter was the exception to the rule.

Peter wanted to see the car stay in the family and was happy when his aunt Corinne stepped up to the plate and decided to ensure the ’69 Mustang convertible would become her dream car.

The main issue was the condition of the car because most teenaged males lean heavily toward a Dukes of Hazzard approach to their driving and Peter was not an exception to this rule. This pony was ridden hard and put away wet for many years after Peter moved on with his life so the car required plenty of surgery before it would be ready for the road.

Earl Jensen was the man for the job because he had an extensive background in automotive restoration and resto mods. Earl told MyStarCollectorCar the project took about nine years from start to finish and required a complete rebuild along the way.

For example, the ’69 Mustang now has new rockers, rear quarter panels, floor, and even a new firewall in the mix.  Earl wanted to restore the car into a better version of the original convertible, while adding some major improvements to the ’69 Mustang.

Earl installed a muscled-out 347 Ford stroker engine coupled to a C-6 tranny. This combination delivers tire-smoking performance upon request by the driver.

The Mustang also has four-wheel disc brakes that can slow it down in a hurry after the driver gets too generous with the gas pedal. Incidentally, this Mustang now sports 15-inch custom wheels that house meatier tires (255s on the back and 225s on the front) so more rubber can meet the road.

As mentioned, it was important for Earl to retain the basic originality of the Mustang when he hit the finish line so he kept its factory ride height for the most part because any minimal height changes would largely result from his aftermarket tire/wheel combination.

Earl added a spoiler to the rear trunk because this addition really enhanced the overall sporty look of the Mustang convertible. He also designed a custom three-piece tonneau cover that gives a very clean look to the car when the top is down.

Earl also put a subtle resto mod on Ford’s “Built with Pride” phrase from that era: “Preserved with Pride”. The ’69 Mustang had been through plenty of misadventures during its long history and required a major effort to revive it.

Ultimately, Earl had to answer to Corinne about the finished project and she was very happy with the result, according to him.

Hats off to Corinne because she ensured this pony stayed with one family.