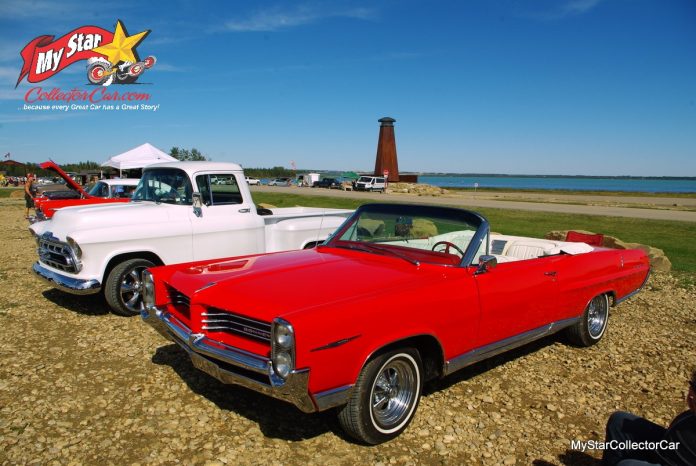 Brian Henkel is the proud owner of a beautiful 1964 Pontiac convertible that left the factory as a Catalina, then earned its Bonneville badges and bling under his watch.

Brian purchased the car in 2004, shortly before he and his wife flew to California from Canada to pick up the car after they had the winning bid in an online auction.

The ’64 Poncho convertible was already 40 years old when it began the trip north and was a “bucket of bolts”, in Brian’s opinion. There was a cloud of engine smoke every time Brian hit the gas, but he and his wife were able to complete the long trip in the car.

Brian began a complete frame-off restoration process that took four years from start to finish and brought the car back to better-than-factory condition. He has clocked over 2300 miles on the convertible after the restoration.

As mentioned, the Pontiac was a frame-off restoration, so the convertible required a careful approach because it had no roof, a critical factor for overall body strength. Trevor Comfort was the body guy who tackled the restoration project and was able to make the car straight as an arrow upon completion.

Brian decided to add some Bonneville features to his Catalina convertible, mainly because he liked the extra bright work on the Bonneville models, along with their extra touches inside the car.

Brian was always a fan of the Pontiacs from the mid-1960s-even though he also had a strong interest in the Impala SS models from the same era. However, the opportunity to purchase a 1964 Pontiac Catalina convertible and upgrade it to the Bonneville model was irresistible to Brian, so he seized an opportunity to own a car that was once a childhood dream.

His vintage Poncho convertible sports GM’s famous 389 cubic inch engine coupled to a three-speed automatic transmission and can easily keep a steady 60 to 70 mph pace on the highway. Brian added an electric fan so he can use it in parades because a slow stop-and-go pace is murder on vintage big block engines due to overheating issues under those conditions.

Brian also added extra gauges to monitor the engine, although he retained the original warning light system for the engine’s oil pressure and temperature. He kept the car’s original bench seat and had it recovered, along with a complete steering wheel restoration.

The convertible has power steering and power drum brakes to enhance the driver’s experience on the road. Brian used the car’s original AM radio but converted it to a modern system with advanced electronic features.

The car’s paint scheme (1970 Corvette Torch Red) is close to the Pontiac’s original color but now the red car really pops on a sunny day with the top down.