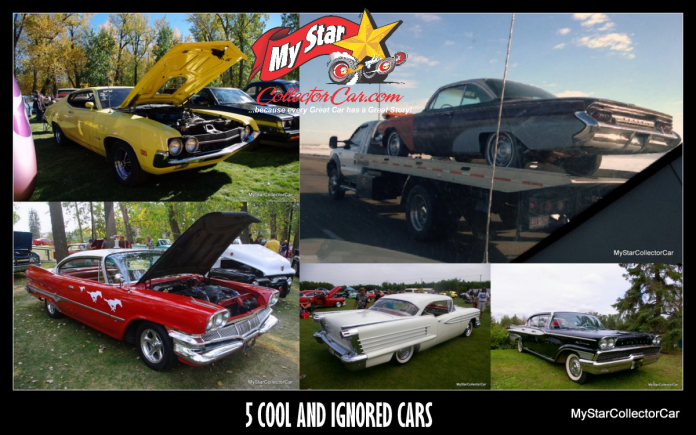 There are certain brands that set the world on fire by their mere mention.

Unfortunately, this slavish devotion to a one-dimensional idea where blinders must be worn at all times (consider Coors Light’s bland product and its great marketing) extends to the vintage car world. However, we will resist the urge to comment on this sad phenomenon and intend to list five car models that are standing in the shadows of more popular Motown iron in the modern collector car hobby.

The first very cool classic on our list is the 1958 Oldsmobile. The top-of-the-line versions had more bling on them than a stereotypical pimp from a cheesy 1970s TV crime show.

Everything that was beautiful about excessive chrome and tail fins could be found on a ’58 Oldsmobile. They looked ready for takeoff right from the factory in 1958, an era from the early stages of the Space Race.

The ’58 Olds was a large-and-in-charge chunk of Detroit iron that has never gotten its full share of respect in the car hobby.

The second underappreciated classic on our list is the 1970 Ford Torino GT. The models that got a death grip on our interest (then and now) were the Torinos with the hidden headlights because the new front ends designed for the ’70 versions were nothing short of spectacular.

The cars looked fast at a standstill and the fire-breathing monsters under the hood delivered enough horses for the ’70 Torinos to look even faster under acceleration in a street showdown. The stylish intermediate Fords were never able to get their fair share of the limelight in the car hobby-then or now-but they were always rock stars in our world.

The third member of MyStarCollectorCar’s forgotten classic list is the 1961 Buick. The ’61 Buick was a huge departure in style from the 1960 Buick because the legendary Harley Earl had left the building and his successor was a non-fin guy named Bill Mitchell, a man who wanted to put his own style stamp on the GM lineup.

Consequently, the 1961 Buick models had no fins and a very cool new design with a completely different fore and aft look. The ‘61 Buicks had a sporty style that made them look like a road rocket instead of a land yacht, but they were neither fish nor fowl in car guy world. Nevertheless, the 1961 Buick models easily make MyStarCollectorCar’s under-loved list.

No list would be complete without our fourth pick: the 1960 Dodge. The ’60 Dodge models were the last of the finned warriors from this branch of the Chrysler family tree.

The cars bore a unique style of rear fins and taillights that gave the appearance of rocket boosters to the 1960 Dodge models. The Dodge choices ranged from cheapo to platinum orders-and every one of them had variations of the basic rocket booster theme on the rear end.

Somehow the ’60 Dodge was bypassed by the passage of time and remains outside of the popular choices in the car hobby. But not at MyStarCollectorCar, we have always liked the looks of this 60-year-old Mopar.

The fifth and final unloved car model on our list is the 1959 Mercury. These cars had a Jekyll/Hyde style because the front clip had a conventional late 1950s Ford look that bordered on bland while the rear deck was a wildly unconventional blend of horizontal fins and tilted V-shaped taillights.

The Mercury models were faster than the famously swift Roman god of the same name so the unconventional taillights were on display any time the cars’ drivers decided to put the gas pedal closer to the floor and lead the pack on the road.