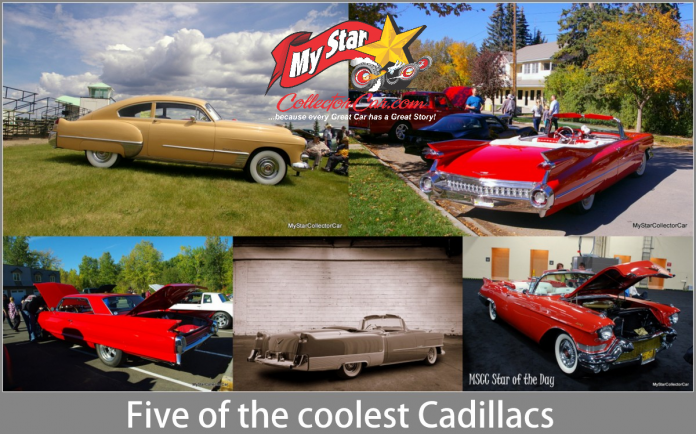 The Cadillac name has always been associated with upscale elegance because the famous marque has a permanent place on the top rung of the General Motors ladder.

A typical Caddy owner enjoyed the prestige associated with ownership of GM’s flagship brand, but he likely underestimated the cool factor inherent in a Cadillac.

However, we at MyStarCollectorCar have always felt certain Caddies had cool built right into them at the factory, so we would like to list five of our picks for cool Caddies. There is no particular science behind our choices, other than a gut reaction to these five Caddies whenever we see them on the street. The MyStarCollectorCar Caddies picks are so cool they don’t even need the King to build their image.

The first example on our list is the 1948 Cadillac. The ’48 Caddy was a trailblazer because this model represented the dawn of a new post-war style for domestic cars. Most of Detroit’s finest would get a major facelift in 1949 but Cadillac had a brand-new look in 1948, including modest tailfins built right into the car’s rear quarter panels.

The smoother and curvier overall style of the 1948 Cadillac made it a natural for our list.

MyStarCollectorCar’s second addition to our cool Caddy list is the 1954 Cadillac because, once again, this car was one year ahead of most domestic cars in terms of style progression. The ’54 Caddy was wrapped in new sheet metal that was completely different from the 1953 Cadillac models.

The new style lent itself to the future for 1950s-era automotive style on the front and back end of the ’54 Caddy because its front end was completely different from Cadillac predecessors that reflected the early 1950s look, while the car’s rear deck was adorned with even taller tailfins.

The era of the tailfin was very alive at Cadillac during the back nine of the Fifties. Perhaps one of the coolest examples was our third choice here at MyStarCollectorCar, the 1957 Cadillac.

Bear in mind Cadillac offered several different models every year as choices for its array of upper echelon buyers, but 1957 was a year when the tailfins on every Caddy model were large and most definitely in charge-plus the fins were ultra-cool on every model.

The fourth addition to our list may well be the most famous Cadillac ever built by the General: the 1959 Cadillac. The ’59 Caddy was one of those rare cars that left the factory as a radically designed custom because it was equipped with some of the biggest tailfins ever attached to a car in stock form.

Consequently, a 1959 Cadillac was instantly cool and became a legend from the moment it debuted in the domestic car market. Just owning a ’59 Caddy will make even the most hardcore nerd cooler than before they owned one.

The fifth and final addition to our cool Caddy list is the 1962 Cadillac. The general automotive trend by the early Sixties was a movement away from tailfins by most domestic manufacturers, but Cadillac was able to combine rear fins with overall style on its ’62 models.

The fins were less garish than earlier Caddies (like the iconic 1959 model), but Cadillac designers created a balance between them and the rest of the car. It was a style that worked in a big (and cool) way for us here at MyStarCollector.