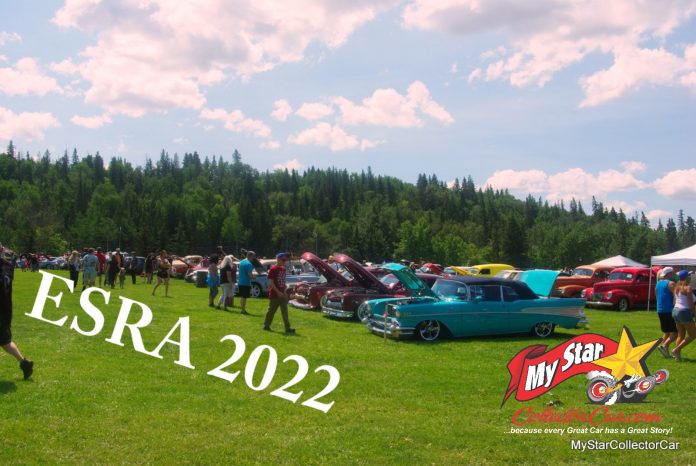 This may surprise some of our readers, but Edmonton, Alberta Canada is a big city by any definition because over 1.5 million people live within its metro area.

However, Edmonton has many surprises in this department, including its Equine Center that is situated in a giant greenbelt that makes visitors immediately forget they are in a big city. Undoubtedly, the organizers from the Edmonton Street Rod Association (ESRA) recognized the Equine Center as the perfect venue for their annual car show. An Equine Center in one of the most picturesque regions of Edmonton was the perfect location and likely strengthened the ESRA organizers’ belief in horse sense.

There were many other pleasant surprises at the 37th annual ESRA car show, and they were a part of the many four-wheeled stars at this event.

One of the most unusual guests at the ESRA show came in the form of a 1989 Ford LTD Country Squire LX survivor station wagon that was still in showroom condition.

The car’s name is a mouthful, but the story behind it will require many more words because this big Ford wagon has enjoyed a pampered life since its original purchase from an Edmonton Ford dealer in ’89. MyStarCollectorCar will use all the words needed to describe this remarkable long roof in a future article.

A 1960 Plymouth Fury convertible was another honored guest at the ESRA show.

MyStarCollectorCar spotted this beautiful drop top last year but was unable to connect with its owner. This year we were fortunate enough to get an interview with the Fury’s proud owner and will provide its full story in a future MyStarCollectorCar feature.

A wild 1947 Austin pickup truck was another rock star at the ESRA show.

The truck now sports a rear-mounted 1996 Corvette engine that is a more-than-adequate horsepower replacement for the little British truck’s original 4-banger that got it from Point A to Point B at a very modest rate of speed. Here is the kicker on this little English beauty: it is a street legal machine. Find out how and why in a future MyStarCollectorCar story.

Survivor cars were the order of the day at the ESRA show, including an incredible 1964 Plymouth Fury two-door hardtop that has an amazing back story with its current owner.

MyStarCollectorCar will connect the dots on this one-of-a-kind survivor Mopar in a future piece. Stay tuned for this one.

Convertibles were also a major factor at the show, particularly because it was a top-down kind of day in Edmonton this weekend.

The young owner of a 1960 Lincoln Mark V convertible thoroughly enjoyed a roofless visit to the ESRA event. He was an unusual owner for a big 62-year-old ‘vert built long before him, but he was the right owner for the stylish retro flagship luxury car from the Ford people. Get the full story behind the proud owner and his big Lincoln convertible in a future MyStarCollectorCar article.

Last, but most certainly not least, the convertible trend continued at the ESRA show when MyStarCollectorCar located a 1965 Meteor (Canadian-built Ford model) drop top pulling a 1958 Mercury holiday trailer that was not built by Ford.

This unusual combination was enough incentive for us to get the full story behind this car-and-holiday trailer duo for a future MyStarCollectorCar feature.