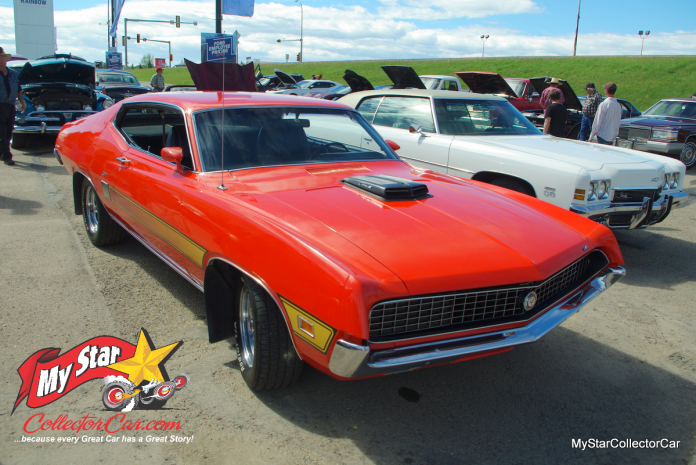 Ford did indeed have a better idea by 1970 when the Torino 429 Cobra Jet debuted in their showrooms.

Derek Leavitt is the proud owner of a beautiful 1970 Ford Torino 429 Cobra Jet, a car that has been a part of his family since his cousin purchased it and became its first private owner. The first 1000 miles on the car were accumulated by a Ford aftermarket parts salesman who used it as part of his route. One would presume the guy was never late for a sales meeting.

Derek’s cousin was a mechanic at a Ford dealership and purchased the ’70 Torino as soon as it was made available to the public. Then he put the next 69,000 miles on the car as its first private owner.

Eventually, Derek was able to buy the car from his cousin and subsequently keep it in the family. The Torino was repainted in 1979, according to Derek, but the rare Ford muscle car still retains its originality in every other area except the battery after 50 years on the road.

For example, the big 429 cubic inch engine and 4-speed manual transmission are the same mechanical duo that were inserted under the Torino’s hood at the factory. The ’70 Torino was also equipped with a unique window rear defroster mounted in the package tray that had a fan combined with a heating element to melt ice. Derek was pleasantly surprised by the system’s ability to warm the rear window and clear frost from it.

Another unusual feature of the muscle car was its rev limiter. A rev limiter (or governor) does exactly what it name indicates: it limits the engine to lower RPMs   Derek told MyStarCollectorCar the unit was bypassed by his cousin early in the game because the 429 engine is able to produce high RPMs without blowing up, so he decided to get maximum performance out of the engine.

Derek concluded the Torino’s massive engine redlined at 6000 RPM-no easy feat for a big block. It will come as no surprise that Derek has not reconnected the rev limiter on his Torino.

One of the more amazing features of Derek’s Torino is its mileage on the open highway. Derek estimates the car gets about 25 mpg at 70 mph (about 115 km/h) because the engine is loafing at a mere 2000 RPMs at that speed. Derek believes the car’s highway gears on the rear end are a part of the mileage magic and means the engine does not have to work as hard at higher speeds.

Another unusual angle for a true muscle car is Derek’s assessment of the car’s practicality, and he puts forth a convincing case for his Torino. Derek labeled it as a 5-seater because the Torino can handle his entire family of five, including his two young sons. He also likes the Torino’s massive trunk because it can hold a lot of gear, including a tent for camping trips.