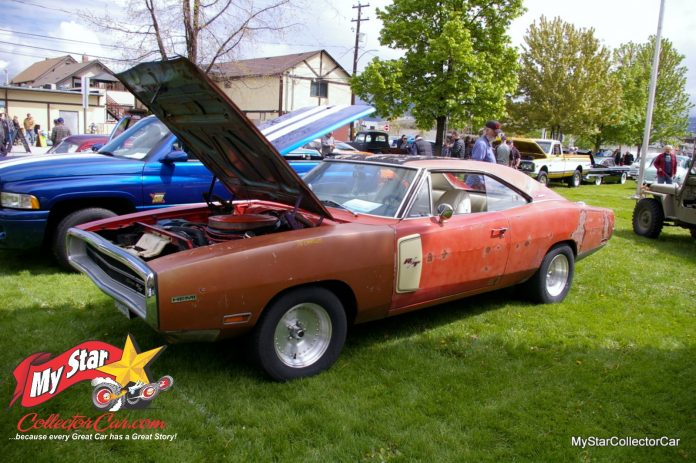 The second-generation Dodge Chargers were a runaway hit for the boys from Mopar.

The 1968 Charger ranks among the best designs ever put on a car, a notion that was strengthened by its starring role in the ‘Bullitt’ car chase.

However, a 1970 Dodge Charger RT was the center of attention at a spring car show because it seemed stitched together by a stroke of genius. Dean McCarthy is the proud owner of the ’70 Charger RT and the creative force behind the car’s current style.

Dean told MyStarCollectorCar the Charger left the factory as a 440-Six Pack muscle car and now sports a 1968 Hemi under its hood. We at MyStar would call that big block engine swap a promotion for the Charger, given the fact a ’68 Charger RT only had to engine options: Fast (440 Six-Pack) and even faster (426 Hemi). Dean’s car is now even faster.

Dean is no stranger to the muscle car hobby, but he wanted a fast car that could also be a driver, so he cobbled together his ’68 Charger without a facelift to pretty it up. In fact, he chose to expose the car’s build process, including the factory lead joints on his Charger’s C-pillars that sweep back into its fastback design. The car’s vinyl roof was ruined by time and no longer hid the C-pillar weld seams, so Dean decided to highlight that process.

The Charger suffered from an almost terminal state of neglect, largely because it was likely worked hard before it left the road at least 30 years ago, by Dean’s estimation.

The mix-and-match phase of Dean’s ‘70 Charger project included 1980s style wheels built by a now-defunct custom manufacturer that he felt were a big part of the Eighties car hobby and “the good old days” in Dean’s life. The wheels were a popular item for upgrades on older vehicles during the Eighties, so they were a natural fit on the old Mopar in a retro custom way.

He also added a 1971 GTX steering wheel to his Charger because Dean liked its style, plus the steering wheel was in pretty good shape compared to the car’s original one.

The Charger still has its original interior, along with a retro air freshener that is another Eighties memento for Dean’s car.

Dean told MyStarCollectorCar he “basically worked on the Charger fulltime (40hrs/week) for 5 weeks” to bring it back on the road.

The car sports front disc and rear drum brakes to slow down the massive Elephant under its hood, along with headers to help the giant Hemi breathe easier under the hood.

The net result is a car that “gets more attention than my finished car”, according to Dean. His Charger is now more than roadworthy and gives Dean the freedom to drive it any time without worrying about its paint or body along the way.

The imperfect Mopar is a perfect fit in his life.