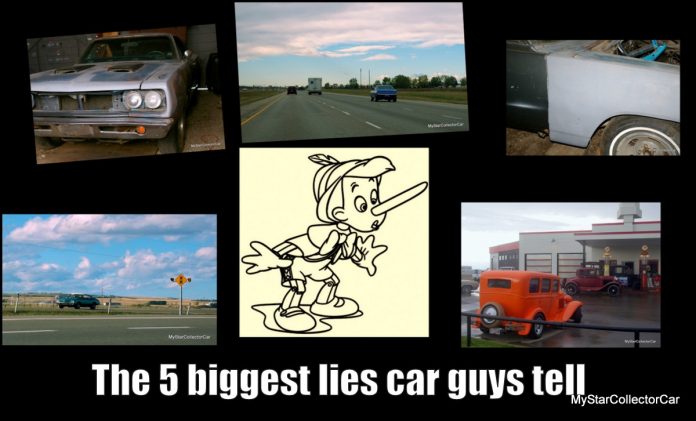 Spreading exaggerated falsehoods about a topic of interest is not unique to the car hobby.

Nevertheless, the car hobby is not immune to lies, whether they are intended or unintended truth-stretches by the guilty party, therefore MyStarCollectorCar would like to reveal the five biggest lies we have heard over the years.

The first whopper on our list is the generous mpg (miles per gallon) number car guys present as fact to the public. The yardstick for most car guys is 20 miles per gallon, although some car guys choose to bump up their mpg numbers to 25 or better.

20 mpg was the Mt Everest of gas economy numbers during a bygone era, simply because 20 mpg was largely unachievable for most older cars if their original drivers pushed them hard on the then-new freeway systems-or used their full-sized domestic car as a city driver.

Gas was inexpensive until the 1973 Arab embargo, so fuel economy was not a big-ticket item for domestic car buyers. However, an original equipment full-sized V-8 car built during the old days of cheap gas still does not hit 20 mpg with today’s expensive gas, despite the sincere assertions of their 2021 owners.

The second falsehood on the MyStarCollectorCar list is the top speed of the stock retro rides. One of our favorites is “I was doing about 120 mph (roughly 200 km/h) and still had plenty of gas pedal left”. The first lie is they were doing 120 mph in an old car with original brakes, steering and powertrain since most sober car guys will not test the fiery crash gods in an old ride.

The third car guy tall tale applies to the notion the drivers were doing 120 mph in a factory original car and still had plenty of gas pedal at their disposal. The cold-hard fact is the retro car would likely have been past its top speed if it had anything less than a monstrous factory big block under its hood, so the car would have been maxed-out before it hit 120 mph. Particularly if it had low gears from the factory.

Additionally, the extra gas pedal would not have made a huge difference even if the car hit 120 mph because the engine would have already given everything it had just to get to a buck twenty.

The fourth car guy fabrication of the truth is the amount of money they have invested in the retro ride. Any car project done to a high standard will be costly in terms of time and money. The final tally for the entire retro ride investment can easily double or triple during the restoration process if it is done properly, a fact most car guys choose not to advertise at length.

Unless they are selling the vehicle, a situation that brings us to our fifth and final car guy lie which is their actual restoration costs as old car owners compared to their inflated restoration costs as old car sellers. This embellishment may be a solid game plan in the fine art of the sale, but MyStarCollectorCar likes the liars in Number Four better than Number Five’s liars.

At least they are car guys and not just curbers missing a car guy soul.