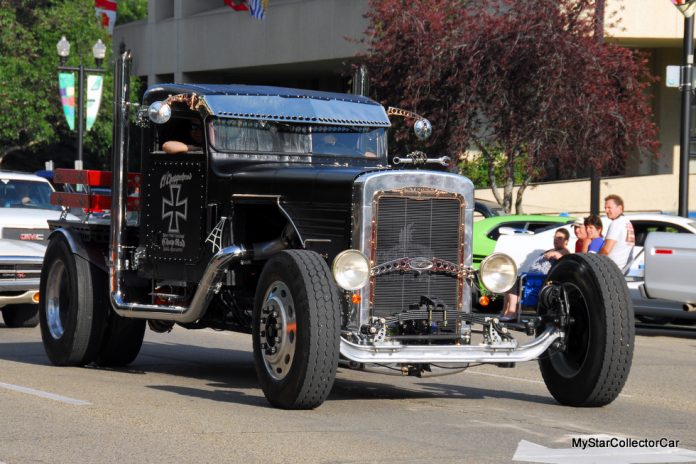 ‘Evil Pete’ is an attention-getting device of the highest order.

This wild ride would upstage any flesh and blood mega- star actor in a remake of ‘Mad Max’ because it is just that cool in a menacing post- apocalyptic mechanical movie star way.

The stylish monster is the result of a Franken-truck marriage between a 1979 Peterbilt construction style cab and a Cummins Big Cam diesel heart ripped right out of a Kenworth donor rig. The first question that I posed to its creative owner/creator, after the initial shock-at-first-sight abated was; “What is this crazy machine”? 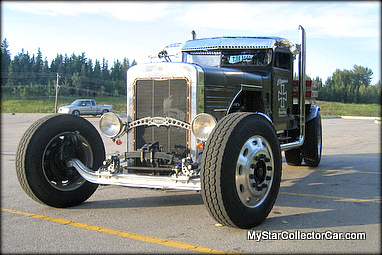 Chris Rondeau, the creative genius behind ‘Evil Pete‘, simply answered that question with a question; “What do you think it is?” My first vibe about this custom rig was actually pretty simple: I thought it was a giant rat rod. I already knew it was a giant crowd-pleaser because it was difficult to get near the beast when I first encountered it at a downtown cruise.

In fact, people were crowding around it like crazed paparazzi at a Brangelina sighting and many photos were taken with this big rig hot rod celebrity squarely in the spotlight amidst its new fan club posing for photo ops around it.

Chris is one of those rare guys who has a natural sense of creative flair and enough wrenching skills to make his ideas come to life. The ‘Evil Pete’ idea was born in his imagination about seven years ago when he began to formulate his game plan for the unusual custom rig project.

‘Evil Pete‘ actually began as a simple concept question from Chris; “Wouldn’t it be cool if..?” Most people leave these ideas permanently in the concept stage, but Chris is not that kind of guy. Instead, Chris figured out his large list of personal creative touches for the project and sketched his ideas on paper.

He also created a model of his project so he could see the finished product in miniature. People would see the model and ask; “Is that real”? Eventually his project began to roll toward the “It’s alive!” phase when Chris started to assemble the pieces for the full-sized version of his rig and, now that he has it on the road; he can tell them that “it’s real now”. 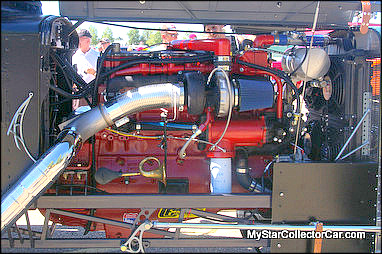 The outsourced pieces include some very creative custom metal-cutting from templates designed by Chris, so the entire truck is composed of some very artistic surprises of a sometimes menacing nature born in Chris’s overactive imagination.

In fact, Chris will challenge onlookers to spot all of the subtle custom touches on ‘Evil Pete’. My personal favorite is his hood ornament which is a skeleton hand welded from bolts and spark plugs that grip a wrench.

One of his many custom favorites is his “steam punk” tank straps which pay tribute to the ‘Wild Wild West’ movie that featured some crazy mechanical creations.

The Peterbilt is a construction style cab which means that it does not have a sleeper on it, so it lends itself very well to my initial impression that it looks like a giant two-seater hot rod. The fact that Chris wants people to draw their own conclusions about its current description status gives me confidence in my own conclusion that it is indeed a giant custom rod in my humble opinion.

One of my reasons for labeling it as a giant hot rod is the stance of the front wheels on Chris’s rig. He designed and built a custom front end that pays tribute to the classic Model T “suicide front end” hot rod look from a bygone custom era with its extended front wheels style. 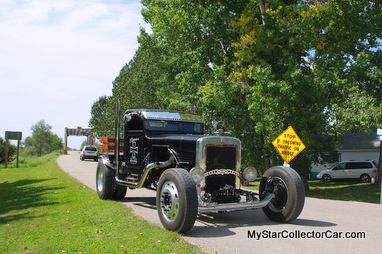 Chris steered me toward the slanted truck box rails which he built to give ‘Evil Pete’ a working truck look to showcase its roots in an un-pampered world. He also gave a hint of his own impression about the truck when he admitted that he leaned toward a stripped-down moonshine runner look with his project.

The only car part on ‘Evil Pete’ is its set of 1937 Buick headlights and they are a very stylish touch on the truck.

‘Evil Pete‘ is a huge star attraction every time Chris hits the streets and he is comfortable around the many people who want to hear the story of the giant custom hot rod. Once Chris got started, he took only 18 months to complete his very unusual project that he never intended to be a show quality star. It just ended up that way. 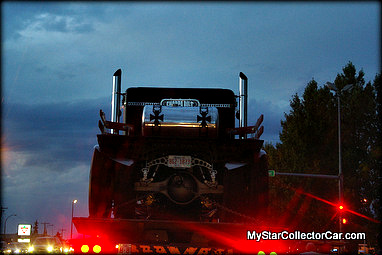 And that is a pretty happy ending for a project that was “done on a junkyard budget”, according to its proud owner/creator.

WHY CLASSIC PICKUP TRUCKS ARE ON THE RISE IN PRICE AND...