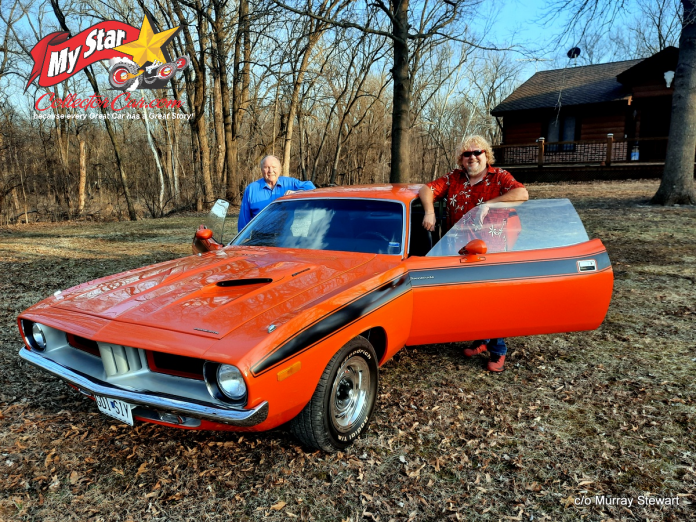 Murray Stewart was a newly minted teenaged driver when his dad Bill made a promise to buy Murray his first car.

Murray recalled how his dad searched for the right car after Bill made the birthday promise and found the car hidden in the back of a used car lot in another town. Bill and his family used to live in that town, so Murray was even aware of the Barracuda’s history with its previous owner, a guy who had a need for speed and blew up “about a dozen transmissions” in the car along the way, according to Murray.

The fact the Barracuda was banished to the rear of the car lot, parked in a large pool of oil, and formerly owned by a local “stunt driver” worked against the asking price on the car, so Bill bought it for 650 dollars. Fortunately, the oil leak was the result of a poorly installed oil filter and Bill was able to fix it with a new, correctly installed filter.

After purchase, Bill towed the ‘72 Barracuda back to Iowa from Arkansas behind his 1977 Chrysler New Yorker and stashed the car at a buddy’s local gas station. Then Bill headed to his family’s house and presented the keys to Murray inside of a series of boxes wrapped by Murray’s mother. Most of the boxes contained nothing-but got smaller as Murray got closer to the smallest box-the one with the keys to the Barracuda.

Initially Murray thought the keys were an extra set of keys to the New Yorker, but Bill took him to the gas station and showed him the Barracuda for the first time, right after one more prank that included a dilapidated car at the service station to make Murray think it was his belated birthday present.

The Barracuda served Murray very well for his high school years and was his daily driver for about five years until Murray “started getting fancy pickups”, in his words. As a result, the Barracuda was retired from regular use and Murray parked it under his rear deck at his house before he sold the property to his brother-in-law.

The Barracuda remained in the same location until Murray’s brother-in-law decided to renovate the house and asked Murray to move the car. He was able to gain storage permission from a local rural property owner and parked the Barracuda in a cow pasture for many years until Murray moved the car to his own newly acquired acreage in the area.

Murray’s 50th birthday celebration was another milestone in his relationship with the ’72 Barracuda because one of the party-goers spotted the car and wanted to help Murray restore it. His name was Greg Goodson, and he had a long history as a builder in the local car hobby.

Greg was the right guy at the right time because the car required a major restoration, a grim fact that became painfully clear when the Barracuda was bead-blasted to reveal its issues. There were huge rust holes in the car that even included the firewall. It was “beyond repair”, in Murray’s opinion, but he added “My dad bought it for me”, and that was more than enough reason for him to restore it.

The restoration took several years and was completed by 2019, according to Murray. He took a hands-on approach to the process, but Murray wanted to acknowledge the people involved in the project (Greg Goodson, Kevin Laughlin, Chattan Goodson and Rick Poling) because they played important roles during the restoration.

However, Murray’s father Bill may have played the most important role in the car’s long history since Bill raised his son to be a car guy and bought Murray his first car.