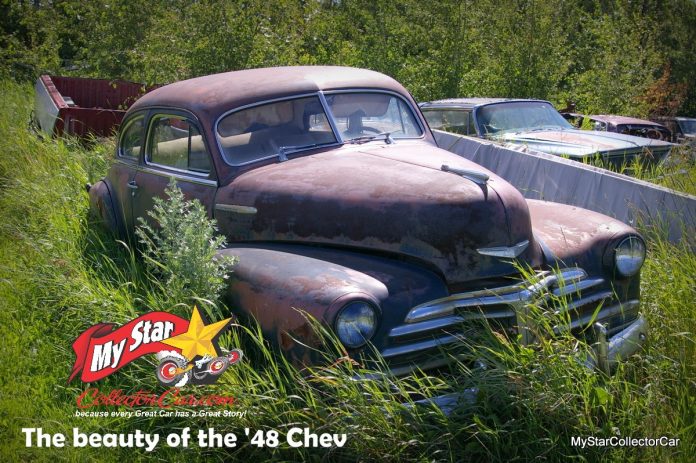 1948 was the end of the line for old style sedans built in North America.

The United States formally entered World War Two in 1941 and began to transform its auto manufacturing facilities into full-time weapon supply builders. The end of WWII required an enormous amount of planning to return the facilities back to automotive manufacturing capabilities.

1942 marked the last days of production for civilian vehicles so the Big Three (GM, Chrysler, and Ford) used the same basic design and engineering from the early days of the war to build its new-for-1946 models.

In 1946, four years was a long period of time between new cars for many customers, given the fact most vehicles from that bygone era were not built for long service and too many miles.

Therefore, a post-war car that looked like a pre-war car was not a huge issue when compared to the fact it was new and not worn-out. The average car buyer in 1946 was an eager customer whose main concern was a fresh car, regardless of its outdated style.

Major style changes would debut in 1949 for most domestic cars when Detroit finally brought something new to the table just before the dawn of the Fabulous Fifties. It was the end of the line for many of the old school car designs, including the 1948 Chevy.

Nevertheless, the ’48 Chev will always be held in high regard here at MyStarCollectorCar, so Jerry and I (identical twin MSCC writers) would like to put forth 5 good reasons why we love these unloved cars.

The first reason is we learned how to drive three-on-the-tree manual transmission cars in a 1948 Chevy Fleetline Aerosedan. We may have only been 13 years old, but we figured out how to drive an older brother’s 1948 Chevy on the family driveway at our rural property.

None of these driving lessons took place under the supervision of adults, including our older brother or parents for that matter, because we chose to self-teach ourselves when it came to the ’48 Chev–along with the fact they would not have been impressed with 13-year-old kids driving the car.

The only issue was the car had a worn-out shift linkage and locked in gear, so we learned how to bang the linkage with a ball peen hammer to free it and avoid detection about our impromptu driving lessons.

The second reason was the unique fastback design of the 1948 Chevy Fleetline Aerosedan. These cars were ahead of their time in terms of fastbacks and blazed a trail for the famous fastbacks that defined the 1960s. None of the style of the 1948 Chev Aerosedan was lost on us as kids- or even now for that matter.

The fourth reason was the 1948 Chevy was the right mix of chrome and sheet metal in our opinion. The bling on the car accentuated its curvy design and added to its overall appearance in a big way. For example, you could set a table for the Waltons on its fat front fenders, so the chrome bars at the rear base of the front fenders were a perfect way to showcase the 1948 Chevy’s overall design.

The fifth and final reason why we are fans of the 1948 Chevy Fleetline Aerocar is its cool factor. It looks chopped right from the factory and has the right ingredients to elevate its owners from nerd-hood to rock star-hood in one simple step when they are smart enough to buy one.

Just our opinion here at MyStarCollectorCar.

MSCC MARCH 1 STAR OF THE WEEK: DIPLOMAT-WHEN GETTING THERE IS...