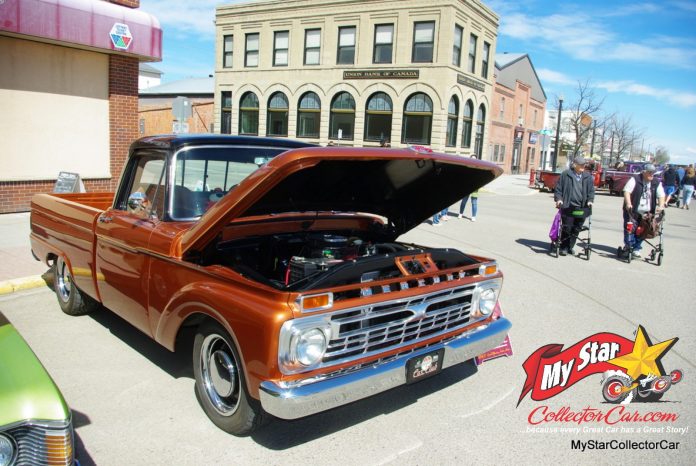 The Mercury truck is a mystery south of the border in the United States because they were built primarily for the Canadian market.

There are many reports of these trucks creating confusion down south because of the Mercury badging on what appears to be a Ford pickup.

The history of this particular truck is a little blurry because it was built from eight parts trucks, so its lineage is a little like the stray mongrel at a pet shelter–hard to define. Kevin Williamson is the proud owner of this custom Merc, and he is also the architect behind this build–and the other truck that came out of the donor fleet.

Kevin had one goal in mind when he started the project. He wanted to build a vehicle he could drive comfortably across Canada but there was one condition–it had to be cool. This truck runs a mildly-cammed 351 Windsor (in keeping with the truck’s Canadian roots) combined with a C-6 automatic transmission and Ford 9” rear end with a 3:25 gear ratio.  The Mustang II front end makes the driving experience far more 21st century than mid-1960s.

The truck took two years to build because Kevin added an assortment of unique touches to the truck. This was a very complicated project and Kevin admitted, “it took a lot of friends to finish it”. He took the truck right down to the frame, stripped it and powder-coated it. The cab and box were a big part of the equation and they both turned out great.

The box originally had a metal floor but now it has a wood floor thanks to the talent of Kevin’s buddy who modified the factory setup to accommodate the retro look. He also did all the repairs to the tailgate because it had some rust on the lower base.

There is a non-factory electrical outlet in the box for what Kevin called “future tailgate parties” and the gas tank is now at the rear of the truck.

You can fill the tank through a custom gas inlet hidden under the wood near the back of the truck plus the truck is set up to haul a trailer for the trek across Canada. The factory correct bumper really sets off the back end of the Merc.

The cab is another example of how much work has gone into this truck because it’s been upgraded with a ton of sound deadening and new-tech window seals, but it still retains a strong factory look. There’s air conditioning in the truck now because this truck is built for the long haul.

Kevin wanted his Mercury to look a little different, so he opted for a two-tone that really set off the side profile on the Merc. He broke the lines up with some well-placed pinstripes along the flanks of the truck.