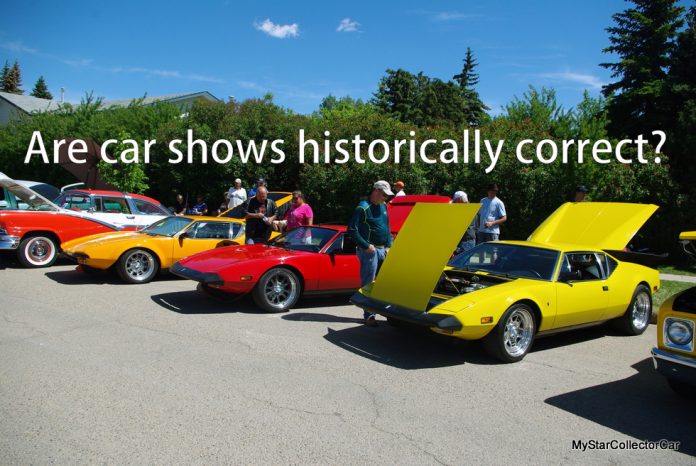 A car show is a like a warm and fuzzy step back in time—that’s why they’re so popular.

Car shows are a nice trip back to kinder, gentler days but do they really represent a bygone era?

The answer is yes and no.

Yes because car shows are a great way to see what people used to drive—and no because they don’t capture the reality of what people really drove back in the day so here are five myths you’ll see at every car show.

The second myth is found in the world of the Mustang. Ford built 559,451 Mustangs in 1965 and that’s a huge number but the other production numbers are also massive.

Mopars provide the 3rd myth with the Plymouth Barracuda. You’d expect the E-body ’70 Barracuda would have massive build numbers if car shows were real but actual production numbers tell a different story.

Camaros are the fourth source of inaccuracy at car shows. Just over 160,000 Camaros hit the Chevy showrooms in 1967 so their debut was a big success.

But it doesn’t stack up against the full-sized Chevys because they sold over a million Impalas, Biscaynes, Bel Airs etc so a realistic show would have ten big Chevys for every Camaro.

Corvettes are the final source of inaccuracy at car shows. For example, you’ll likely to see a ’66 Corvette at a bigger show but GM built just under 28,000 C2 ‘vettes in 1966 while American Motors sold just under 300,000 cars that same year.

Does this mean you’ll see ten ’66 Ramblers for every ’66 Vette at a big car show? No—not unless they’re including a ‘vette section at AMC shows.

Car guys know why this happens. Popular cars were saved and obscure 4-door sedans were cannon fodder at wrecking yards.

That same popularity spawned a giant aftermarket parts industry for Mustangs, Camaros and E-body Mopars but when was the last time you opened up an extensive parts catalog for a ’58 Dodge 4-door sedan?

The answer is never because free enterprise is based on supply and demand and Camaros are the gold standard for collectability while ’58 Dodge sedans (as cool as they are) only reach certain car guys.

Nevertheless, in the real world back in ’58, you would have seen far more sedans on the road than two-door hardtops—that’s why car shows are a Walt Disney version of what really went down in the golden age of cars.