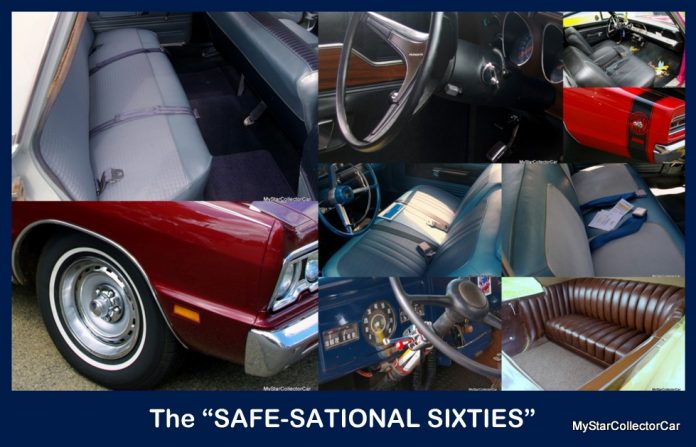 Car safety was never a big-ticket item during the post-war and pre-safety warrior era.

Maybe Ralph Nader helped change the game when he broadsided the Corvair in his best-selling book ‘Unsafe at Any Speed’, but it would also be fair to speculate that automotive safety had already taken hold in North American bureaucracy.

For example, the seatbelt became mandatory in 1966 cars manufactured in North America. Rear seat belts were also included in the mix, although laws requiring passengers to wear said seatbelts were not common in most North American jurisdictions at the time.

Most drivers and their passengers chose not to use the seatbelts in 1966-but they did have that choice-even if Detroit had no choice in the matter when it came to including seatbelts in their cars.

Many of us were literally children of the Sixties and simply went with the flow when it came to seatbelt use in the family sedan. Therefore, many of us placed our confidence into our father’s driving skills when they chose to ignore the seatbelts and were still able to safely navigate us through our childhood without the use of seatbelts along the way.

Eventually, a newer generation of safety bureaucrats was able to add mandatory seatbelt use to their growing roll of red tape and take the choice out of the car owners’ hands.

Another addition to mandatory safety equipment in North American cars occurred in time for the 1967 model year: 4-way flashers. The 4-way flasher unit was included in the signal light system and provided flashing lights for all four lights used in this system.

The use of the 4-way flasher unit involved either pushing a button, pulling a knob, or flipping a switch to engage the emergency system. The 4-way flasher system did not require the ignition key to be in the “on” position and worked independently from the signal light system.

The 4-way flasher system was always a good idea born in bureaucracy because it allowed a driver to warn other drivers about their emergency who presumably proceeded with caution while the first driver was enjoying their involuntary and likely unwanted misadventure.

The misadventure may have extended from a long list of potential mechanical failures found in a bygone automotive era- or horrific weather conditions before we called them a climate crisis. Either way, a 4-way flasher unit did not solve most issues, but it prevented further complications initiated by other bone-headed drivers in most cases.

The final addition to MyStarCollectorCar’s list of safety items mandated by 1960s lawmakers was the debut of side marker lights in 1968 for North American cars. The side marker lights were designed to provide better night illumination for cars on the road.

The lights ranged from minimal circles to large rectangles, depending upon the year, model and manufacturers’ dedication to overkill when it came to side marker lights.

The side marker lights did indeed make the cars more visible when they debuted in 1968-but few modern builders share the love of them and lean heavily toward complete elimination of side marker lights when it comes to a custom rebuild on a classic from the past.

Nevertheless, MyStarCollectorCar believes the choice to rid the cars of side marker lights is an occasionally futile attempt to make the car cooler and may even come at a price because they are also eliminating automotive history.

Even if the side marker lights were created by a non-car guy/overzealous 1960s-era bureaucrat.