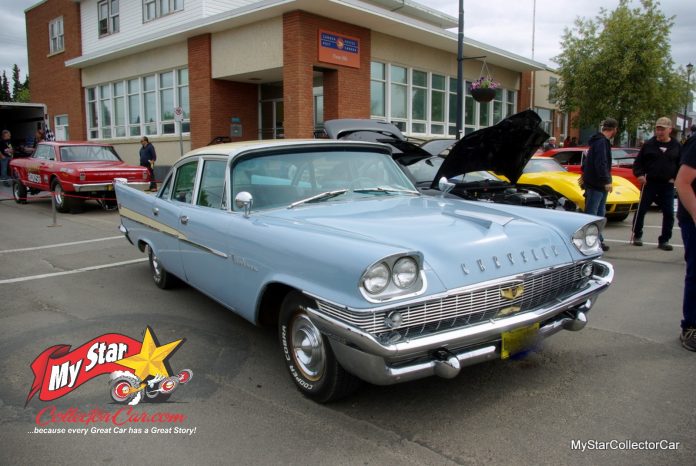 Legacy cars are the foundation of the car hobby because you can’t do better than a story line about a classic car with multi-generational family ties.

Cam Miller is the current caretaker of this legacy car, so he completely respects the history behind this finned beauty. His grandfather bought the car brand new and drove it until 1976—the last year it was registered–because he bought a new car to replace the Windsor.

The car went into long storage, but Cam said his dad started it regularly until 1991 when unfortunately, an accident took his life. The car went into deep hibernation after that until 2018, when Cam rescued the car because the building “was falling down around it”. Cam said the mice “got up to the heater core and that was it”—so the car didn’t suffer the fate most cars do from mice damage.

Cam is an auto technician, so his focus was on the mechanical side of the car. There’s a 354 cubic inch poly V-8 under the hood so Cam had the block bored out 60 over and installed hemi pistons because they were (a) more readily available and (b) fit in a poly engine. He also rebuilt the factory automatic in the car and had a little trouble setting the shifter cable position on the transmission—but it’s working great now.

Cam upgraded the brakes with a power brake, dual master system, and new brake shoes for the safety factor, plus he added a four-barrel carb and intake from a donor Saratoga to wake up the 354 V-8.

He had the radiator re-cored, heater coil re-cored, and replaced the water pump so the Windsor runs well on hot days.

He also replaced the idler arm bushings, and he may address the steering box in the future but basically, he wanted the car to be 100% reliable. Cam achieved that with his systematic approach to a car that had basically sat in a shed for almost 30 years.

Fortunately, the body never suffered much because this car was off the road so long. The paint is still original, and the trim is in great shape–so he doesn’t need to mess with the visual survivor status of the car.

Cam’s goal is to completely protect the factory integrity of the Windsor because he wants to retain the history of the car, but he’s run into one issue. His grandfather was a farmer, so this may be the most barebones ’58 Chrysler ever built—because farmers are practical by nature. That explains why this is a radio delete car. A farmer could never justify the cost of a radio option, but Cam is wrestling with the idea of adding a factory radio.

This is a family car in the truest sense. Cam’s son used the Windsor for his high school graduation, but not before his mom patched up the seats with denim to help preserve the original upholstery.