Most Canadian car guys are aware of the Fargo truck.

This was a made in Canada first cousin of the Dodge pickup that was sold at Plymouth dealerships during its production run until the Fargo brand was phased out in the early 70s.

We spotted this beautifully restored 1946 Fargo truck at a show and knew the pickup had a story behind it.

The story turned out to be a long history since it was bought brand new in ’47 by a farm family and it had almost become a member of their family.

3rd generation farmer Roy Enzie is the current caretaker of his father’s legacy truck and he could not be happier with the responsibility because Roy and the Fargo are the same age. The truck actually came into the family in 1947 because of a vehicle shortage in ’46. 1946 was a time when the post-war North American factories were under conversion back to civilian products from military production.

However the old Fargo had been a part of Roy’s life for as long as he could remember, in fact ever since he was still a young infant in 1947. The truck was used on the farm by Roy’s father until the 60s and, in typical farm boy fashion; Roy learned how to drive in the old Fargo. 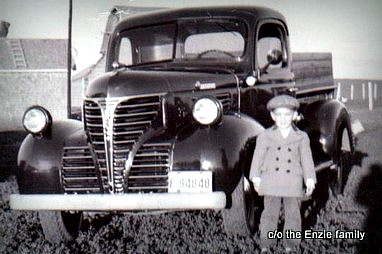 One can assume that any kid who grew up on a farm learned how to drive at a very early age out of necessity in most cases, so Roy had some very fond memories of the Fargo pickup. The truck’s primary duties included hauling grain and coal because it had to earn its keep on the farm, so the tailgate was never used or abused by hard work.

The truck was also stored out of harm’s way before and after its retirement to a machine shed on the family farm. The fact that Roy’s father respected the truck meant the man was a crucial part of its survival until the day when Roy decided to restore the Fargo back to its original glory.

The truck is an incredibly well restored vehicle because Roy took his time to do the job right when he began the process six years ago. He pampers the truck these days and will keep it around 40 mph on the road when he hits the road. Roy did admit this fact; “when I was a kid I went a lot faster.”

We should note the Fargo is not overly pampered in its retirement years because Roy refuses to trailer the truck and instead loves any opportunity to jump behind the wheel and hit the country roads near his farm with it. We at MSCC applaud any owner who follows this philosophy.

We noticed quite a few of Roy’s family were at the show with him, including his son and grandson. All of the three generations were enthusiastic fans of the Fargo and will ensure the Fargo will be a valued member of the Enzie clan for many years to come, if the little guy has anything to say about its future.

We cannot get enough of these family connection stories at MSCC.

The strong family history in this Fargo story is the icing on the cake for us.