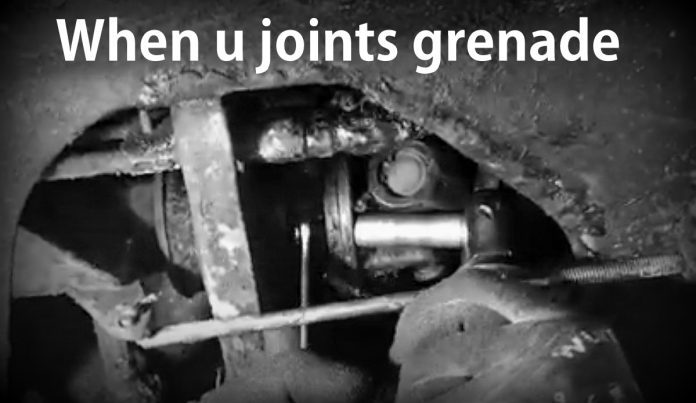 I consider myself to be an expert in the field of wonky u-joint sounds because I learned the hard way about their important role during a road trip a long time ago.

We ate two complete meals each before I bested him with a sizable dessert order that nearly made him puke.  Then the three of us jumped into my Volvo and headed down the road, completely unaware of the tired, battered u-joints that were competing with the car’s other mechanical ailments for the coveted loudest noise trophy.

Up to that point, I was able to fix the car’s noises by turning up the radio and ignoring them, but my car has already seen too many miles and too little smiles, to borrow heavily from the late Harry Chapin song ‘Taxi’. Consequently, the u-joints got louder and angrier, to the point where no amount of factory radio power was able to cover the noise.

Naturally I kept driving and held onto the misguided notion that I would easily make it home-particularly if I drove faster along the way. Right up until the u-joint grenaded and drove the driveshaft into my car’s floorboard just before wrapping itself around the car’s rear axle.

There was no such thing as cellphones, so one of my buddies and I hitchhiked into the next town while the other guy remained in the car on the side of the highway. The good news is we got a ride right away-the bad news is the guy was drunk and drove like a complete maniac. The best news is we made it to the next town, got help, and even found a junkyard back in the big city that was open on a Saturday afternoon in July and had a replacement driveshaft, along with a healthier (but definitely not perfect) u-joint assembly.

The entire misadventure was a harsh lesson in u-joint etiquette. In short, when they talk, you better listen and the u-joints in my Volvo were shouting and swearing at me that fateful day.

However, I became a good listener after the initial incident and started to listen for the telltale signs of a bad u-joint before it hit the weapon of mass destruction stage. Over the ensuing years, I had the good fortune to own many vehicles with crappy u-joints that got my undivided attention once I started to hear from them and learned their lingo along the way.

A mild ping is cause for concern when it comes to ailing u-joints, but you still have enough time to make it home in most cases. A clunk when you change gears is not a good sign and will require a healthy dose of good fortune if you intend to ignore the sound and simply turn up your car radio for long road trips. Good luck and feel free to shove large sums of money into electronic poker machines if you want to make foolish gambles like this one.

All bets are off when you hear a loud rumble and can feel excessive vibration when you drive the car because it is the last noise a u-joint makes before it blows up and puts you on the side of the road. The sad part is u-joints and driveshafts for old cars will not be available in a junkyard on a hot July afternoon–mainly because there are so few old car junkyards that still exist in 2022.