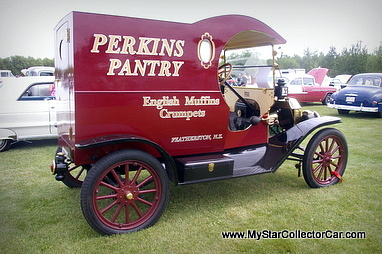 A good car show is like a good book that has a lot of very interesting chapters.

A row of cars with different stories is the ultimate goal with these events.

This 1914 Model T ‘C cab’ is a textbook example of what makes a good car show great.

Ross and Gail Benedict own this piece of delivery truck history and the story behind this T is one that really defines the infancy and ingenuity of mass production. 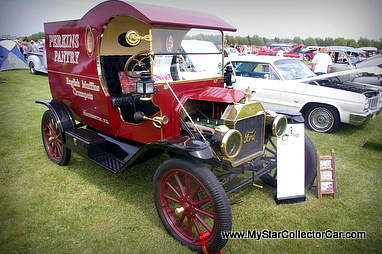 Most Model T owners are walking encyclopedias and Ross is no exception so he gave a brief history of these iconic vehicles, “They could take them from iron ore to a car in 41 hours. In 1914 they could assemble a T in 93 minutes and they paid workers 5.00 a day for an 8 hour day. They built 15,000,000 of them over the run”.

Ross explained the history behind the truck, “It was built by Ford Canada in late fall of 1914 and it was shipped to New Zealand. They shipped a lot of these right hand drive Ts to countries like New Zealand”.

This was an extremely barebones vehicle, “It cost 415 dollars but it was shipped without a cab or bed. A cabinet maker built that on arrival”. 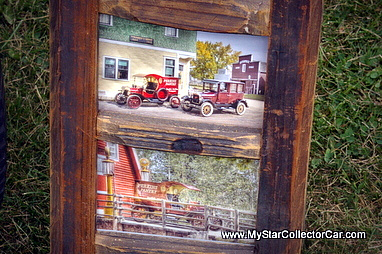 Perkins Bakery in Featherston, New Zealand used this commercial vehicle for many years in the land of the kiwi and according to the ad copy on the back they were a “bite of alright”. 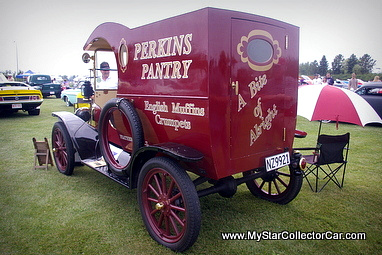 This particular Model T C-cab was repatriated with its mother country a few years ago because Ross  and Gail wanted something unique. There were 15,000,000 Model Ts built so “unique” is a moving target as a concept but this delivery truck was a direct hit with the onlookers. 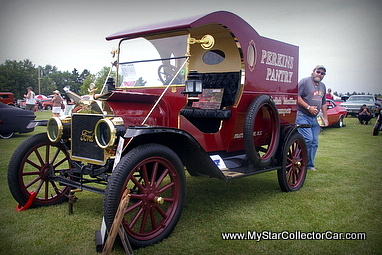 There were very few opportunities to get a clear picture of this crumpet wagon because so many people were gathered around it and asking questions. Fortunately, Ross is like most Model T owners so he patiently answered the same questions for hours.

This Model T actually has an anti-theft device that looks more like a version of the boot they put on cars that are seized or parked illegally. Ross explained that “the patent for the wheel chock came out in 1914” but he didn’t elaborate on the theft risk with this old wagon but he did point out that “it wouldn’t be a quick getaway”.

Ross knows that from experience, “It does about 25 mph so a trip with the wind is 1 hour 10 minutes but against the wind it’s 1 hour 35 minutes. Tough sledding”. 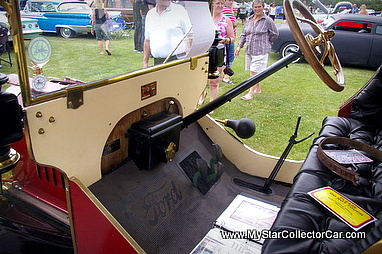 He also admits that he’s upgraded to an auxiliary brake “because of a close call”.

Model Ts have a built-in appeal to everyone because they look so benign and friendly at a car show. There’s no giant supercharger sticking out of a hood, massive racing slicks or giant headers to scare little kids. Conversely, Model Ts offer an open and warm invitation walk up and start talking to the owner. 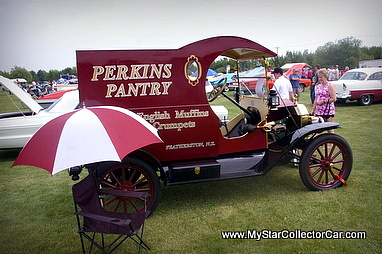 This 1914 Model T C cab is even more of a magnet because it’s a right drive commercial vehicle from halfway around the world and it carried commercial products that are foreign to most North Americans.

That’s why this old delivery truck made a good car show great.

THE FRAIL CROSS-GENERATIONAL BOND OF THE CAR GUY.