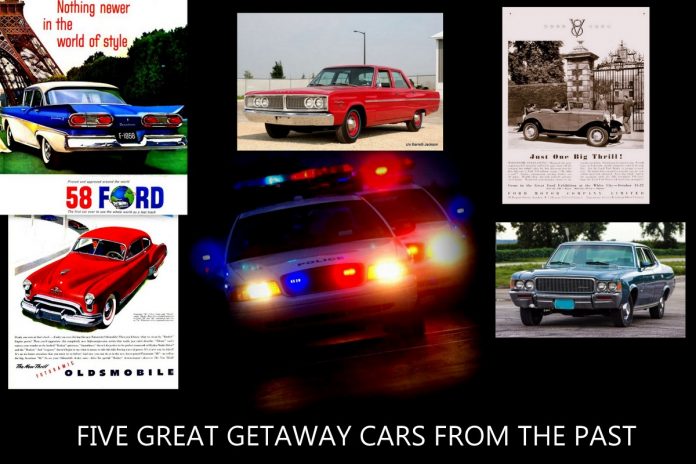 What was the perfect getaway car?

In this case, getaway car doesn’t mean jumping into your brand-new Isuzu MU-X and hitting vacation mode, because no matter how cool TV ads make it look, driving a car like that will never make you interesting.

The key to a good getaway car is always stealth and power because you had to both blend in with traffic and pull away from the scene of the crime at Warp 3. Think Hellcat with minivan sheet metal.

The 1930s were full of legendary bank robbers like Bugs Moran and Pretty Boy Floyd, but the real stars were Bonnie and Clyde. Clyde put the flathead Ford V-8 on the map in 1934 but the flattie debuted in 1932, so a smart bank robber would have stolen a ’32 Ford V-8.

The flattie (L-head) put out a whopping 65 horsepower, but it could hit 76 miles per hour on a good day—that’s over 20 miles per hour faster than a ’32 Chevy. Every extra mile per hour meant there was less chance you’d get ventilated by a lawman, but flathead Fords weren’t invincible. Just ask Bonnie and Clyde.

The 1940s were a different era because most post-war cars were pre-war cars with a new paint job, but in 1949 Olds came up with the Rocket 88. The Rocket 88 was a 303 cubic inch OHV (overhead valve) V-8, so it was cutting-edge technology in an affordable package.

The Olds was capable of 97 miles per hour with 135 horsepower (283 ft-lbs torque), so it would probably outrun a lot of local law enforcement. That’s probably why early 50s hot-rodders loved the 303 Olds under the hood of their jalopies.

The 1950s were full of surprises because Detroit was building cars that could easily crack 120 miles per hour. The key to a good getaway car in the late 50s was finding that rare combination of wallflower looks with a monster under the hood.

Look no further than the 1958 Ford Fairlane with a Police Interceptor 352 cubic inch, 300-horse V-8. Pick a four-door sedan because they confuse eyewitnesses with their mild looks and that police-spec engine under the hood means you’ll be able to run with the guys behind you. After that, it comes down to whether you’re willing to push your cop engine harder than the real cops.

The 1960s were even more insane because the term muscle car was born in the 60s, so that means you’d need an insane—yet stealthy car. There’s only one answer.

Pick a 1966 Dodge Coronet 4-door sedan with one option—the 426 hemi. That elephant under the hood means nobody will outrun you and the boxy sedan exterior means nobody will remember your car. You and your stolen money could be three counties away before they even issue a vague description about your vague car.

The 1970s were less than spectacular, but the police ran fleets full of Mopars with 440 Police Interceptor motors, so you’d needed something like a 1971 AMC Ambassador SST with the 401 cubic inch, 335 horsepower (430 ft-lbs torque) option.

The AMC sedan wouldn’t outrun a police 440 Dodge or Plymouth, but it’s in the ballpark plus it’s a humble Ambassador sedan. Very few witnesses would pick it or you in a lineup—that makes it infinitely more stealthy than a yellow Superbird.