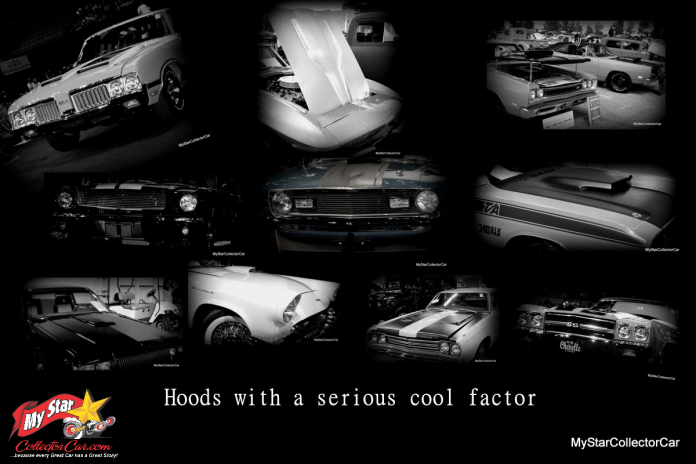 The hood—or bonnet if you’re British—is one of the most distinctive features of a classic vehicle.

The 1st Gen Thunderbirds started a trend back in the mid-50s with a center-mounted scoop that Pontiac’s GTO would copy a decade later.

T-birds looked faster with the extra bulge in the hood and that factor was something Detroit would file for future references. It was a lesson they would learn and apply—over and over.

Chevrolet took a deep interest in the hood a decade later with the big block bubble hood on the Gen 2 Corvettes.

This bulge in the hood told everyone your Vette had a monster tucked under that fiberglass skin.

It was light years away from the base, 6-cylinder Mustangs, because the GT350H hood was function and form with a big dose of Carroll Shelby magic.

The 1969 Plymouth B-bodies came with two versions of muscled-up hoods. The first one had the standard horizontal power bars on both sides of the hood but that subtle HEMI badge told you everything you needed to know.

The second version was far less subtle, and it came in the form of the 440 SIX PACK hood.

These 440 SIX PACK hoods were all business—they were light and they didn’t come with hood hinges, plus they looked tougher than Clint Eastwood.

The Olds 442 was a beast from Day 1 but its hood never telegraphed any messages until later. It was a sleeper (except for the badges), but in ’67 things started showing up on the hood.

The same principal applied to the legendary 1970 Chevelle SS 454.

You couldn’t stuff a bigger engine under the hood of a mid-sized car like a Chevelle, so the cowl induction bulge made sense and it looked cool—call it a big win for style and engineering.

Ford’s Mach I hood was another study in how much a cool hood meant to a car in 1970.

The 1970 Challenger T/A hood was another blend of style and engineering, because the 340 6-pack under the hood needed to breathe—and look cool doing it.

There was a lot of sheet metal on the 1970 Challenger hood, but the hood scoop broke it up like Mt. Everest in the middle of Nebraska.

The Buick Grand National had a less obvious approach to its hood. The hood scoop was smaller, but that was by design because the Grand National was going for a less-is-more look.

That didn’t mean the Grand National was a typical lukewarm 80s car your aunt would drive —it just meant this Buick flew under the radar in the 1980s, so its hood gave a few clues, but not enough to blow its cover.